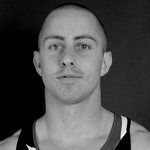 If you're in the UK and want a hot, naked Olympic hopeful to work your party...you're in luck! Decathlete Roger Skedd is funding his Olympic training in part by working nights as a naked butler at private parties, including those of gay men. Skedd told the Mirror:

Sometimes you’re at a ­several million pound townhouse in London and others you’re in a two-bedroom terrace in a council estate in the back of beyond ­dealing with people who are totally leathered. ...

Sometimes it’s gay parties, which are a bit of an eye opener. Basically you don’t know what you’re being thrown into. It could be 30 people screaming and drunk, or all quite sedate and you have to get people in the mood for a ­party. Some people think they can throw ­themselves at you but you have to take the reins and let them know where the boundaries are. Otherwise it could get out of ­control.

Skedd is listed via a sports modelling agency.