Share All sharing options for: Kansas college suspends golfers after they pose naked for team photo 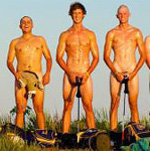 The 15 members of the Bethany College Fighting Swedes golf team have been suspended for three tournaments after posing naked for a team photo (with golf clubs hiding the naughty parts). From KAKE:

The men posed with the head of their golf club covering their private parts. The picture was then posted on facebook with the title Men's Bethany Golf Team. The coach says the boys were inspired by pictures of the UCLA men's players who posed with a bucket of golf balls in front of their private parts. Those pictures were published in the magazine Golf Digest and Sports Illustrated.

Bethany is a Lutheran college and the players are appealing the suspension. The punishment is absurd and the players did nothing wrong. These shots are fairly common and ESPN The Magazine's body issue specializes in them. It was heartening to see many of the comments on the KAKE saw this properly as much ado about nothing:

Here is the offending photo (hat tip to Deadspin):

Hat tip to Jim Allen for the item.