German soccer captain Philipp Lahm: I'm not gay, advises closet for those who are

Share All sharing options for: German soccer captain Philipp Lahm: I'm not gay, advises closet for those who are 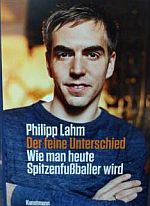 Philipp Lahm is captain of the German soccer team and he has a new book out where he denies rumors he's gay, says he doesn't have a problem with gays but that gay players should stay in the closet anyway. AP has these excerpts:

"First, I am not a homosexual. I am not married to my wife Claudia for appearances and I do not have a friend in Cologne with whom I really live," Lahm wrote in the book entitled "A Subtle Difference."

"This speculation doesn't matter to me," he said referring to rumors about a male companion in Cologne. "I have nothing against homosexuals and I find that there is nothing wrong with homosexuality."

"But it never ceases to amaze me that these isolated types, who tell these stories, can have a lot of influence on public opinion. 'Philipp Lahm homosexual' (…) do you not have anything more important to talk about?" he said.

People like Lahm are a big problem. He gets all indignant and defensive over rumors instead of laughing them off since he insists they are baseless and has not offered any evidence they have negatively impacted him.

At the same time, he reinforces the idea that being an out pro athlete is impossible, instead of offering his unqualified support like the Sean Avery's of the world. What an awful message to send.