Moment #31: NBC plays along with Johnny Weir and his sexuality

Share All sharing options for: Moment #31: NBC plays along with Johnny Weir and his sexuality 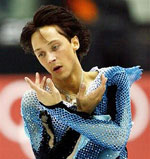 Figure skating, 2006: Johnny Weir was one of the great characters of the 2006 Winter Olympics. He said whatever popped into his mind and the media ate it up. It was obvious that Weir was gay, but his coyness about the question forced the media to dance around the issue.

I had reporters calling me from Torino, Italy, during the Games asking my opinion. When I said that Weir was gayer than me, it gave columnists license to address the issue. NBC took it one further, airing segments with the skater called "Weir Eye for the Skate Guy" and "He's Here, He's Weir."

The skater went along with the innuendo, going shopping and dishing on fashion. He was playing to the media and having a ball. Here is how I described one of his NBC segments:

"I'm not a good, little figure skater that goes to bed at 8:30 every night and gets up at 6:30, eats my three meals and goes to bed again. [in the background, playing on his car radio, as he's driving in the piece, swear to God, is 'What a Girl Wants, What a Girl Needs']. I'm a real person. I do real things.

"I'm not going to be the shiny, sparkly, flower-holding figure skater that sits here and says I'm going to do my best today and if I don't, then I'll go home and train really hard next time. That's not me. I'm going to be really angry if I skate bad and I'll probably say crazy things. That's how I rock it.

"I'm not for everybody. There are going to be people that like you and people that hate you. There's nothing I can do. I don't think I'm a diva or pompous enough to be in the position of acting like a diva, but I like things the way I like them to be. It's really my own game and my own agenda and to live my life as happy as I can be.

"I'm not out there to be a puppet for anyone. … For now, my critics can eat it. I want people to remember me as someone that pushed the envelope, pushed the boundaries of the [he makes an air quotes move with his hands] 'United States figure skating establishment.' … I'm happy with who Johnny Weir is."

Weir publicly came out earlier this year, but to anyone with a functioning brain, he was really never in.