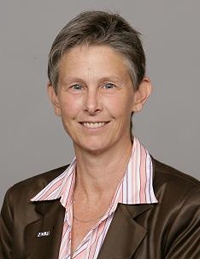 Since the Project’s inception, NCLR has worked to eliminate discrimination based on sexual orientation and gender identity in sports through advocacy, outreach, and litigation. ... Our Sports Project works on all levels of athletic competition, from the NCAA to the NFL, to ensure that LGBT athletes can compete and participate openly and equally.

They immediately aimed their legal resources at the sports world. In 2003 they sued the University of Florida for kicking lesbian Andrea Zimbardi off the school's softball team. In 2005 they sued Penn State on behalf of Jennifer Harris for the homophobic policies of women's basketball coach Rene Portland. In 2008 they sued San Diego Mesa College for the firing of a lesbian coach.

They have also developed partnerships with key organizations and game changers. Pat Griffin and organizations she has headed up have partnered with NCLR for years, helping Carroll and her group advocate for gay and transgender rights in the NCAA and organize sensitivity training for coaches, athletes and administrators. They've also worked with the San Francisco 49ers, LPGA, U.S. Olympic Committee and many others.

NCLR has established itself as the most valuable national gay organization in the fight against homophobia in sports. To understand that value you just have to look at our eight 100 most important moments (including this one) that NCLR has been a key part of: Kye Allums comes out (44), Rene Portland leaves Penn State (47), First trans student-athlete think tank (77), NAGAAA sued over straight-athlete limit (78), Gay and Lesbian Athletics Foundation conference (82), Jen Harris sues Penn State (87), Univ. of Florida settles Zimbardi lawsuit (100). Pretty impressive.