Share All sharing options for: Moment #17: Brendan Burke's passing away leaves a void 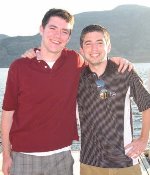 Hockey, 2010. When Brendan Burke, student manager of the Miami (Ohio) hockey team, came out of the closet on ESPN.com in late 2009, the story was touching and heartwarming. The support of his father, Toronto Maple Leafs GM Brian Burke, was a newsworthy piece of the story and drove a lot of worthy attention. We here at Outsports paid some attention to it but, with all the college coming-out stories we've told and followed days later by the death of Mike Penner, the story came and went.

All of that changed Feb. 5, 2010. It's one of those moments I'll never forget where I was, in Aspen about to sit down for dinner when the news came through: Brendan Burke had been killed in a car crash.

Suddenly the story of another kid with high hopes and a winning smile became a story of unrealized potential. When he came out of the closet just 10 weeks earlier, Burke had hoped to tackle homophobia in the sports world. And he had a shot. While his father had lots of other commitments and was a busy man, the platform Brendan had access to was one that few gay activists (Andrew Tagliabue comes to mind) have ever sniffed. With his death, all of that potential good seemed dashed. While this wasn't the result of homophobia, it was a story that touched people in the gay community and the sports world similarly to that of Matthew Shephard so many years before.

But like a phoenix, Burke's family became focused on building Brendan's legacy and took on the mantle of the work he had planned to do to undermine homophobia in sports. Just weeks after his death the USA hockey team wore Brendan Burke dogtags during the Olympics; USA hockey soon after created a Brendan Burke Internship. Brian Burke announced that he would take a more active role in defeating sports homophobia; Brian has since worked with school organizations and marched in the Toronto Pride Parade. Thanks to Brian's work, gay pro hockey players know they have at least one NHL team where they can be openly gay. Brendan's sister Molly, a student at Bowdoin College in Maine, is working at her school to bring more attention to the issue of gays in sports and earlier this year brought her father to speak to the school.

But it's the rise of Patrick Burke and his role in the fight against sports homophobia that will largely carry on the lasting legacy of the untimely passing of his brother Brendan. Patrick is a scout with the Philadelphia Flyers. Soon after Brendan's death Patrick told me, "I don't know what I'm going to do, but I'm going to do something." Since then he has worked quietly to turn the attention of the hockey world toward ending homophobia. He's worked with GForce to create a speakers forum called 'The Invisible Athlete.' And he's working on more projects that will continue to change the course of sports homophobia in North America. The ranking of this moment so high on our list is based in large part on our faith in the work that Patrick will do over the next couple of years. Still, Patrick says he is simply trying to live up to his brother's standards, as Brendan "would have been much better at this than me."

Brendan's passing away did leave a void in the gay-sports movement, but it's a void his family is filling very well.

While this is a sad moment on our list, it's a reminder that the things we do while in this world can live on beyond our years. That's certainly the case with Brendan Burke.