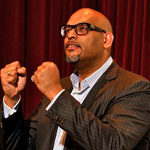 Basketball 2007: Amaechi played for two of his five NBA seasons for the Utah Jazz for an owner who, after Amaechi had left the team, refused to show "Brokeback Mountain" in his theaters because of the gay theme. So it was ironic that the NBA's first publicy gay player was a member of that franchise.

Amaechi retired following the 2003 season and came out publicly in 2007 with the release of his autobiography "Man in the Middle." Being the first NBA player to publicly come out, his story garnered widespread attention. He appeared on media outlets across the U.S. and in his England, where he lives, sparking a wave of reaction, most of it positive.

One high-profile negative reaction came from former NBA player Tim Hardway, who said he hated gay people. Hardaway was roundly condemned and he became a changed man because of it, now leading a fight in his native El Paso in a gay rights battle. If it hadn't been for Amaechi telling his story, Hardaway likely would never have began his journey of acceptance.

Amaechi, a motivational speaker and entrepreneur, has never been shy about voicing his opinions, and has often ruffled feathers, even in the gay sports community. He is passionate about what he believes in and communicates it well, making his views still relevant in the sports word. When Kobe Bryant this spring called a referee a "faggott," the New York Times sought out Amaechi to write his perspective:

... When someone with the status of Kobe Bryant, arguably the best basketball player in a generation, hurls that antigay slur at a referee or anyone else — let’s call it the F-word — he is telling boys, men and anyone watching that when you are frustrated, when you are as angry as can be, the best way to demean and denigrate a person, even one in a position of power, is to make it clear that you think he is not a real man, but something less.

I challenge you to freeze-frame Bryant’s face in that moment of conflict with the referee Bennie Adams. Really examine the loathing and utter contempt, and realize this is something with which almost every lesbian, gay, bisexual and transgender person is familiar. That is the sentiment people face in middle and high schools, in places of worship, work and even in their own homes across the United States. ...

I was always struck by the public reaction to the coming out of Amaechi and that of the WNBA's Sheryl Swoopes in 2005. Amaechi was not a star and yet his story became fodder for media coverage for weeks and still reverberates. Swoopes is a superstar, yet when she came out there was nowhere near the level of interest. I remember Bill Maher quipping along the lines of, "A lesbian basketball player? Knock me over with a feather," which summed up most people's feelings.

Amaechi was aware of the import of a man coming out in sports, when he told Will Leitch in a New York magazine piece this week: “I came out three years after finishing a reasonably average career, and everybody freaked out. Imagine if I had been good.”