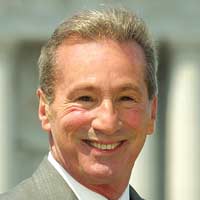 After digging a little, it seems there's more to the story than was originally released about the pulled California bill that would ensure access to K-12 sports for transgender students. The bill was pulled by lead sponsor Assemblyman Tom Ammiano (right). We had previously reported the reasoning, given by Sacramento based advocate Ben Hudson, as totally insane:

With as much political wrangling that happens, the concern that the right will use the FAIR Education Act against us does a disservice to the students in schools right now.

While Hudson says trans athletes are technically already covered by the law, he also said the law isn't being interpreted correctly; This new bill would have made it clear.

The National Center for Lesbian Rights contacted us this morning and said it was because of the groundwork they are doing, along with the Transgender Law Center, that drove them to ask the bill be pulled back. NCLR sent this statement:

“We are very grateful for Assemblymember Tom Ammiano’s leadership and look forward to working with him on this vital bill. NCLR, TLC, and EQCA urged him to hold off on the bill this year because we want the opportunity to do more education with school districts and officials. We are finding that the more people learn about this issue, the more supportive they are.

I had previously asked this question in this post:

Why is it that transgender people are always the punching bag for gay advocates? Their rights and equality are constantly put on the back burner or left out in the cold...when they're the people who need the protection most desperately!

It seems that's not what's happening. NCLR and TLC wanted more time to work with their increasing number of allies in the high school sports world to lay stronger groundwork and bring in more voices to the bill. NCLR's Shannon Minter told me they wish they had not pushed for the fast-tracked bill originally, but they were so excited about the prospects of the bill that they possibly rushed to get it written. Instead of going forward with the bill before they have all their ducks in a row and risking disaster at the legislative level, they are asking for an extension on their homework...so they can give the bill all the support it deserves in the future.

Clearly, it would have been better for NCLR and TLC to figure this all out before the bill was introduced. And despite my personal belief that you have to push push push on issues like this, if both NCLR and TLC believe they must wait...then they must wait. Though I hope they don't wait long. Now that the idea is out there, and a bill has been written, all expectations should be that the bill sees the light of day next year. While transgender youth don't have the numbers, the discrimination they face is astounding. The allies behind this bill, and all bills against transphobia, have to move forward with haste.

You can donate to NCLR here to make sure they have the resources to do just that.