Share All sharing options for: NFL playoffs: Good to the last drops

Hot players of the week

The Patriots and Giants hold on to reach the Super Bowl as the Ravens and 49ers make crucial game-deciding errors.

How I saw the AFC and NFC championships games:

Wow. That was the best Sunday ever for conference championship games. The 49ers-Giants game came down to the last play, with the Giants winning 20-17 in overtime. The Ravens-Patriots came down in essence to the last play, with the Patriots holding on, 23-20, when Ravens kicker Billy Cundiff missed a chippy 32-yarder. “A miracle,” Cyd texted me after the game. Being a Pats hater, it was more a nightmare for me. My pregame picks, though, were pretty spot-on – Patriots 24-20, Giants 23-20. Patriots-Giants II in the Super Bowl in two weeks.

This is the first time that both Super Bowl teams easily could have – and probably should have – lost in the conference title games. If Lee Evans of the Ravens hangs on to a Joe Flacco pass in the end zone for a split second longer, Baltimore wins. And if Kyle Williams does not fumble two punts for the 49ers, the second in overtime, San Francisco almost certainly wins. Such is life in the ultra-competitive NFL, where one or two plays can decide a season.

I will write my annual Super Bowl for the clueless next week, but my first take is the Giants to win. I know New England is a 3-point favorite, but my money is on the Giants. I think they match up well with the Patriots and know they can beat them since they've done it the last two times. Is Eli Manning Bill Belichick's Kryptonite?

The Ravens have to be sick about their loss since they did everything except score more points. If you had said before the game that Flacco would outplay Tom Brady (he had a QB rating 40 points higher) and that the Ravens would gain 398 yards and have the ball for seven more minutes, you would have assumed a Baltimore win. This was a case of one team losing it more than another winning. Sometimes it's better to be lucky than good and this win harkened back to the early Patriots' Super Bowl runs when they would not play their best and still win; that's the best thing they have going for them heading into the Super Bowl.

Cundiff's field goal miss was the shortest ever to tie or win a playoff game. I had a feeling he would miss since the whole attempt was rushed and the ball was snapped as the play clock hit zeros (here's a great analysis of why the kick was missed). The Ravens had a timeout and it's baffling they did not call one to make sure everything was in order with the game on the line.

And the Evans drop was hard to swallow since he had the game in his hands. It's true Sterling Moore knocked the ball loose, but Evans had it in his hands and simply needed to secure it for one more second (there is a debate over whether the NFL should have reviewed it, though it was not a catch) and it's game over. Vernon Davis got drilled by a Saints' player the week before and he held on. The pass from Flacco was the best any of the four QBs threw Sunday, but in the end it didn't matter. The Ravens ran off 24 plays on their final three drives for 127 total yards and got zero points. During the same stretch, the Pats ran four plays.

Finally, don't get me started on the Ravens' play-calling by offensive coordinator Cam Cameron, running when they should have passed and passing when they should have run. They survived similar head-scratchers a week earlier against the Texans, but the Patriots ain't the Texans. Cameron is rumored to be on his way out, so that's addition by subtraction. Maybe Flacco wasn't the problem all along.

In the NFC, the Giants should award their game ball to the 49ers' Williams for his two fumbled punts. The Giants' 10 points in the second half and OT all came after the Williams' fumbles and negated a heroic effort by the 49er defense, which was on the field for 95 plays.

The key, besides the fumbles, was the 49ers being unable to mount consistent drives. They had three big plays – two TD passes to Davis from Alex Smith and a Smith pass to Frank Gore that set up the second Davis TD. San Francisco was 1 of 13 on third downs and that kept the Giants within striking distance all game. A week after playing lights out against the Saints, Smith was a pedestrian 12 for 26 and the 49ers' last four drives with the game on the line were three plays, three plays, three plays and three plays and zero first downs.

So far, the 2011 season is playing out like the 2007 season for the Giants. Given up for dead in December both years, only to make the playoffs. In their first playoff game they beat an NFC South team (Tampa in 2007 and Atlanta this season); in their second they beat the No. 1 seed (Dallas and Green Bay) and in their conference championship they win at the No. 2 seed in bad weather (cold Green Bay and rainy San Francisco) on an overtime field goal by Lawrence Tynes following a turnover. We'll see if the Super Bowl makes this a perfect case of deja vu.

Hot players of the week: If the Super Bowl was a bodybuilding contest, the Giants would crush the Patriots. I've featured punter Steve Weatherford before for having the best body of any kicker maybe ever. He made a great play in handling a bad snap on the game-winning field goal by Tynes. And it's hard not to notice the Devin Thomas, who loves going shirtless and who Sunday recovered both fumbled San Francisco punts. 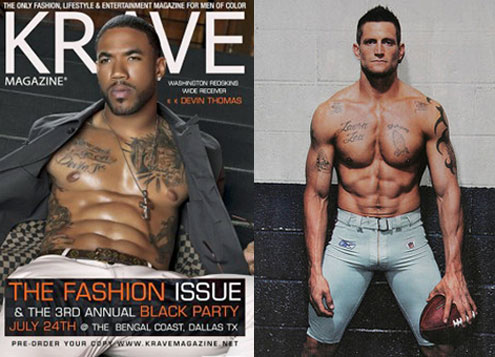 Devin Thomas, left, and Steve Weatherford of the Giants