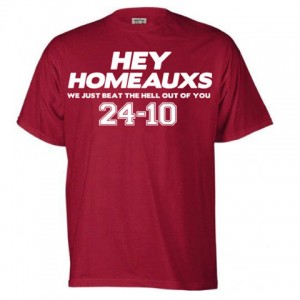 Unicorn Booty picked up on a site that marketed this T-shirt. It was created to sell after Alabama beat up on LSU tonight in some bowl game or something in New Orleans (the score would be printed at the end of the game and distributed in the hours afterward). "Homeaux" is supposed to be a French play on "Homo." Unicorn Booty asked people to write to the site owners and express how they feel.

The readers obviously did that. In response, site owner Chris Ivey immediately removed the site, explained he didn't mean to be homophobic, and apologized. He wrote on Unicorn Booty's site:

I came across your website about the shirts. I must admit that I did not think of the fact that these shirts could offend homosexuals. Rather, they were aimed towards LSU fans as a joke leading up to the big game. Seeing now the reaction has opened my eyes to the hurtful nature that this shirt presents towards certain people, and because of this I have taken the site down. I have members of my family who are gay, and in no way do I view homosexual in a negative light as someone's personal opinion is their own. This was a misguided joke and the site will cease to exist.

I now see the negativity these shirts produced towards homosexuals, and not a joke towards LSU fans. My sincere apologies are to anyone who was offended.

How did the readers respond when he removed the site like they asked, discontinued the T-shirt and apologized sincerely? They attacked him, of course. Why are so many gay people so unforgiving? The guy couldn't have done more to express his regret. Man, we gotta grow up.