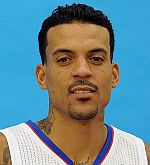 Matt Barnes of the Los Angeles Clippers called a policeman in Manhattan Beach, Calif., a "f---ing faggot" in a July 30 incident where the cop was trying to arrest Barnes for an outstanding warrant. A video of the incident surfaced today on TMZ:

TMZ has obtained video of cops arresting L.A. Clippers star Matt Barnes in Manhattan Beach, CA ... and it's clear Barnes and the cop have beef with each other ... and at one point a very angry Barnes shouts a gay slur: "You're the f**king fa**ot who followed me."

The incident occurred July 30, outside a restaurant where Barnes and his wife, "Basketball Wives"star Gloria Govan just had dinner. Officer David Gibbons was waiting for 2 hours for Barnes to exit the restaurant.

When Barnes emerged, Gibbons told him he was under arrest for an outstanding warrant -- driving on a suspended license. Barnes asked to see the warrant and Gibbons said he'll see it when he gets to jail. Barnes said if Gibbons didn't produce the warrant he was leaving.

No felony charges were filed and Barnes "pled no contest to misdemeanor interfering with a cop and driving while not in possession of a license." The TMZ story has video and makes it clear that the two had a prior run-in.

The NBA fined Lakers star Kobe Bryant $100,000 for calling a referee a "f---ing faggot," so saying the same to a cop is worth at least that. Zero tolerance.

Hat tip to Joe in Philly.