Share All sharing options for: NFL players don't wear cups and it's a not a problem for them 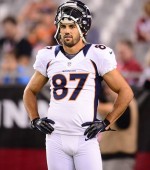 In the wake of Ndamukong Suh of the Detroit Lions kicking Houston Texans quarterback in the groin on national TV, I've had some people ask me whether NFL players wear cups. It's a logical question since it would seem that part of the body would be at risk if exposed. But NFL players don't wear cups and it's not a problem for them.

In his weekly column for SI.Com, Peter King had these two nuggets about cups:

"I would dare you to find someone that does."
-- Lions quarterback Matthew Stafford, on WXYT Radio in Detroit, asked about wearing a cup to prevent the kind of kick to the groin that Ndamukong Suh inflicted on Matt Schaub.

Cups are passé in football after the high school level.

When former quarterback Sage Rosenfels texted the other day, "When was the last time a guy got injured and it cost him real time by getting hit in the nuts?" I answered: "I do not recall a single one.'

I can't recall an injury like that either. Players want to feel fast and the sense is that a cup can slow you down and be inhibiting. It's also apparently considered weird if a player wears one, as this quote from a 2006 ESPN.com story shows:

"If you want to get made fun of by your teammates," says one current NFL player, "wearing a cup would be the fastest way to do it. In all the games I've played -- on every level of the game -- I've only caught a knee down there once or twice. It's not the best feeling in the world. And no one wants to have millions of people watching you cupping your (cashews) in agony. But if someone came out wearing a cup, the rest of the team would be like, 'What's going on with this guy?'"

I have played flag football for years and have never worn a cup. Admittedly, the game is much less violent than tackle football, but contact does occur. I can never recall anyone being injured due to a lack of a cup, whereas busted fingers are routine.

I am curious as to whether readers know more about this issue in football or other sports. Is wearing a cup common in some sports or is it something we outgrow the need of once we hit puberty?