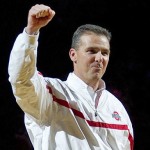 Ohio State head football coach Urban Meyer has apologized to the Ohio State LGBT alumni group, Scarlet and Gay, for use of shirts whose color was perceived as offensive to gays. The shirts, given to players who loafed during conditioning drills, were called "lavender" by strength coach Mickey Marotti and that sparked a controversy. Ohio State said they were a "very purple," but whatever the color, Meyer issued this apology:

Thank you for sharing your concerns regarding the purple mesh pullovers. The use if purple was never intended to offend anyone but since it has, we have taken steps to change the color.

Please accept our sincere apologies. We have core values of respect and honor within our program, and these are two principles that are central to my personal life, my coaching philosophy, and to Ohio State and its athletics programs. Bias has absolutely no role in how we think or operate.

The letter was sent to Tim Valentine, President of the Board of Governors OSU GLBT Alumni Society Scarlet & Gay, and Garett R. Heysel, Assistant Dean of the college of Arts & Humanities. and society vice president. The two issued this statement:

“Hidden under the guise of being a competitive motivator or “the only color left,” the choice of lavender reinforces homophobia and promotes bullying amongst students. The color lavender is associated with the lesbian, gay, bisexual, transgender, and queer (LGBTQ) community,” Valentine said. According to Valentine, the decision to change the color of the jersey is a step in ending traditions which shame people for being different “when we should be celebrating the very differences that set us apart.” Society Vice-President, Dr. Garett Heysel was equally happy with Meyer’s apology. “We saw it as another step forward for the University and for the Buckeyes.”

Scarlet and Gay hopes to use this issue as a springboard to discuss sexual orientation and its place in athletics. Ohio State's College of Law’s Sport and Entertainment Law Association is hosting a panel and workshop on the national developments about homophobia in athletics on April 16.

I applaud Meyer for his letter. Regardless of the reason the shirt color was picked (be it lavender or purple or tutti-frutti), it clearly caused offense with the LGBT community. Changing the color was simply the right thing to do as opposed to doubling-down and trying to parse what color it actually was.

Update: We are getting a lot of idiotic comments saying "what's the big deal?" with the color. The strength coach and players referred to the shirt color as "lavender." That's what ignited the controversy. Just Google "lavender gay" and see the number of hits, including this from ABC News: "The title of the film is a reference to the color lavender, which is often associated with the gay, lesbian, bisexual and transgender (LGBT) community." This association is what upset the gay group at the school. Ohio State officials later said the color was "purple."