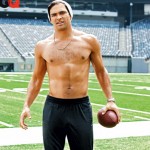 Men of Chelsea get ready -- Tim Tebow is coming to town. The Denver Broncos traded the quarterback to the New York Jets today for some draft picks. Talk about a culture clash -- a home-schooled virgin who talks God in every other sentence going to a city where gay marriage is legal.

Tebow will be the likely backup to Mark Sanchez, and there's another contrast. Sanchez likes posing for fashion magazines, enjoys young coeds and is a big fan of show tunes. If they do a remake of the "Odd Couple" for Broadway, these guys can be the two new leads.

From a football standpoint, it seems desperate for the Jets. They obviously plan on using the immensely athletic Tebow in various "Wildcat" packages, where his running ability and the threat to throw can make him dangerous. But gimmick football seldom works and I don't see this move putting the Jets over the Broncos.