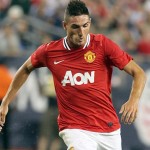 Federico Macheda of Manchester United, currently on loan at Queens Park Rangers, was among four players in English Premier League soccer to be fined for homophobic remarks on Twitter.

"Federico Macheda has been fined £15,000 and warned as to his future conduct after the Manchester United player admitted use of an abusive and/or insulting word including a reference to a person's sexual orientation. Macheda had requested a personal hearing in relation to the charge for comments he made on Twitter."

Macheda will reportedly appeal his fine, wondering why he got hit with a larger amount than Ranger and Smith. His tweet, in reply to someone else on Twitter, said: "shhhhhhh u stupid little gay." Macheda, in a tweet Saturday, said he was going to delete his Twitter account, though it is still active.

These fines comes as the FA is making a public push to try and end homophobia in English soccer.