Baseball player Reggie Williams: Gays an abomination and are like crack smokers, but I don't hate them

Share All sharing options for: Baseball player Reggie Williams: Gays an abomination and are like crack smokers, but I don't hate them

Reggie Williams hopes to play pro baseball, though he was released in spring training and is without a team. He has succeeded in one area -- taking the early lead for Outsports jerk of the year for a series of tweets that are offensive, idiotic, ignorant and unintentionally comical at the same time.

Deadspin has compiled a "best of" tweets, but a short version: Williams wonders why there are so many gay people, fearing that "if everybody decided to be gay then the human population will be extinct." He then calls gays an abomination based on the Bible, and says seeing "bold acts of gayness in public" offends him like seeing someone smoke crack. Oh, and he's sorry if he offended anyone.

Here is Williams getting into a "discussion" with someone calling him out on his homophobia: 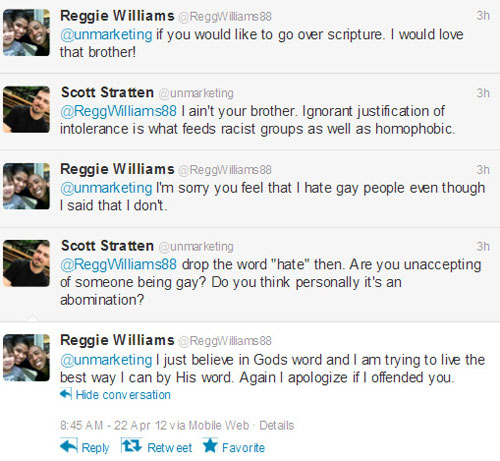 Williams first asked "Why are there so many gay n***** these days?" then changed it to people. In a story last year on Williams (then a Minnesota Twins prospect), one baseball scout called him "just a good human being." It was not an April Fool's story.