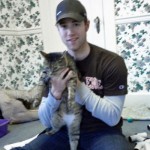 Add goalie Mike McKenna of the Binghamton (N.Y.) Senators to the growing list of straight allies in hockey, spurred on by the "You Can Play" campaign.

McKenna tweeted this is reaction to a story about two other teammates supporting "You Can Play":

Bravo and I'm glad an athlete is making this connection. McKenna sounds like a cool guy (he is holding a cat, after all) and was voted his team's Man of the Year for this season for his contributions to the community. He is also a huge animal lover and raises money for various animal rights group as part of his charitable work.

Two of McKenna's Binghamton teammates, Pat Cannone and Chris Wideman, played for the Miami University of Ohio hockey team while Brendan Burke was the student manager there. "You Can Play" was started by Patrick Burke to honor Brendan, who died three months after coming out as a gay man in hockey.

"Brendan] told me [he was gay] after we won my sophomore year to go to the Frozen Four," said Cannone, the first person outside of family to learn the truth Brendan had hidden. "It was pretty nice that he would come to me, tell me, because we were pretty close. You always want to support your friend when he's going through a tough time. It wasn't easy for him to do what he did. He was very courageous for doing it, and all the credit to him for that. It was just something that a lot of us looked up to, for somebody to tell a big secret like that. I can't imagine what he was going through, but he handled it unbelievably. It's just great the impact he had on so many people; it's really special to see."

"You Can Play" has now started to gain support in hockey's minor leagues. The first team to do a video is the Sault Ste. Marie Greyhounds of the Ontario Hockey League, with defenseman Colin Miller, goalie Matt Murray and General Manager Kyle Dubas. It's the best of the three videos done so far because it's just the three of them talking. They is an adorableness to watching them smile and laugh while obviously reading from cue cards. I hope more of these videos have this naturalness.