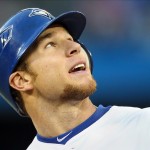 This week’s offerings include NFL minicamps, Major League Baseball, college baseball, the NBA Finals, the NHL, the U.S. Open, track and field and Cristiano Ronaldo rolling on the ground with a teammate.

Photo 1: Miami Heat forwards Chris Bosh (1) and Shane Battier (31) during practice for Game 4 of the NBA finals against the Oklahoma City Thunder in Miami. (Photo by: Derick E. Hingle-US PRESSWIRE)

Photo 2: Arizona Wildcats runner Robert Refsnyder (2) leaves the field after he flied out against the UCLA Bruins during the eighth inning of game six of the 2012 College World Series at TD Ameritrade Park. Arizona won 4-0. (Photo by: Bruce Thorson-US PRESSWIRE)

Photo 4: Toronto Blue Jays third baseman Brett Lawrie (13) looks up at the CN Tower as a baserunner from first base against the Washington Nationals at the Rogers Centre. (Photo by: Tom Szczerbowski-US PRESSWIRE)

Photo 5: John Peterson smiles on the 18th hole during the third round of the 112th U.S. Open golf tournament at The Olympic Club in San Francisco. (Photo by: Kyle Terada-US PRESSWIRE)

Photo 10: Cristiano Ronaldo of Portugal celebrates with teammate Miguel Veloso after scoring his team's second goal during the UEFA EURO 2012 group B match between Portugal and Netherlands in Kharkov, Ukraine. (Photo by Ian Walton/Getty Images)