Share All sharing options for: Bruce Hayes recalls winning Olympic swimming gold and his coming out 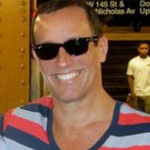 (See video of Hayes below)

Millions of televisions were tuned into the 1984 Los Angeles Olympic Games on the night of the 4-by-200-meter freestyle finals, and the pressure for the Americans was on.

Twenty thousand fans rose to their feet cheering on the four men who were trying to stay calm at the University of Southern California McDonalds Swim Stadium. The noise drowned out their last words to each other, but university students, Mike Heath, David Larson, Jeff Float and Bruce Hayes knew what they were up against; the current world record holder and arguably best male swimming of the time, West Germany’s Michel Gross. Known as “The Albatross” because of his sheer size, 190 pounds, and height of 6 feet 9 inches, had already won two Olympic gold medals, and tonight he was going for his third.

The American’s had a plan however, it’d been decided weeks ago during the Olympic training camp that Bruce Hayes, now 49, was to match Gross as the anchor leg of the relay. Hayes was 20 pounds lighter and 9 inches shorter, but the U.S. coaches decided to take a gamble and capitalize on Hayes’ finishing ability.

“I was known for being scrappy and tough and getting my hand on the wall first,” he said. “I was honored, but at the same time felt the pressure for weeks before.”

Hayes was disappointed he hadn’t qualified for an individual event, but coming third at Olympic Trials in the 200 freestyle guaranteed him a spot in the finals for the relay, which would be remembered as one of highlights of the entire Olympics, and one of swimming’s most memorable races of all time. Should he lose, he would be partly responsible for the first American relay loss since the 1972 Olympics. The American’s dominated the 1976 Olympics, winning all relays, and then boycotted in 1980. This Olympics saw, East Germany and the Soviet Union taking their turn to boycott, and Hayes said there was question as to whether this would be a real Olympic games without them.

Hayes said the pressure was felt by his teammates and himself to stick to their race strategy and hope Heath, their strongest 200-meter freestyler, would give them an insurmountable gap over Germany as their lead off swimmer. But their strategy didn’t go according to plan. The usual relay strategy is to have your fastest swimmer last, which his why they knew whoever swam fourth would be against Gross. Heath, Larson and Float gave Hayes a chance, he entered the water first one-and-half seconds ahead of Gross. This would prove to be too little, Gross had won the individual 200 freestyle by a clear two seconds the night before, and caught Hayes before the end of the first 25 meters.

“I had planned on swimming my own race no matter what, I knew I needed to take it 25m, by 25m, Hayes said. “I was easing off my legs and focusing on great turns, trying to stay as close to Gross as much as possible. I knew the third 50m would be the deciding factor. If he pulled away too much I wouldn’t be able to catch him.”

Hayes remembers being at Gross’ waist as he pushed off the third turn for the final 50 meters, Gross was swimming next to him, on his side of the lane. Hayes said this was a technical error for the world’s best, because it allowed him to draft off of him, making it easier for him to pull even. As Hayes began his last push to the finish, he felt Gross weaken, and heard the roars of the crowd, as they were neck-and-neck for the last 20 meters.

“I think a times, it felt like we were in slow motion, like we were the only two people on the planet,” Hayes said. “I put my head down and didn’t breathe reaching to put my hand first on the wall.”

As the two men touched, the world, the fans and the swimmers all looked towards the times board with baited breathe. Hayes let out a yell of victory; the crowd went crazy, his relay team members jumped, hugged and gave high fives. Hayes out-touched Gross by .04, with the U.S. setting a world record 7:15.69. Gross and the rest of his German team were humble, Hayes said, “They all congratulated us, and shook hands. That moment was a blur, but it was exhilarating and a huge relief at the same time.”

One challenge was over but another challenge was about to begin for Hayes, a secret he had been struggling with since a teenager, his sexuality. Hayes was gay, “I swam in college in the closet, and I didn’t want anything to distract me from my swimming as my focus and energy was qualifying for 1984. So I put the rest of my life on he shelf.”

He said one of the reasons he decided to retire was because he didn’t feel he could be both gay and an athlete at the same time. “I realize now I was wrong, and that you can do both, but I was young and afraid of what people would say, because I had seen what people had said about Greg Louganis.” Louganis, at the time, hadn’t openly admitted to be being gay, but Hayes said it was a well-known fact in the aquatic community. Hayes said, “While everyone respected him for being so dominant in his sport, there were many snide comments, jokes and nasty remarks.”

Although Hayes’ inner circle knew of his sexuality, he officially came out to the world and the swimming community in 1990 as the spokesperson for the Gay Olympics in Vancouver. He was the only Olympic gold medalist at the time to officially come out. Louganis would openly disclose he was HIV-positive in 1995.

Hayes said there were many misconceptions out there at the time he came out, but he did not regret what transpired from his openness. “There were few people that were out, no real athlete’s at the time, but I got a very positive response from the swimming community and I knew this would open up the conversation.”

Hayes became popular with the media, doing numerous speeches, news and TV appearances to speak openly about his decision and try educating the public about being gay. “The stereotype of the gay man is that he’s not athletic, he doesn’t like sports, he’s not good at sports and it doesn’t interest him. That is not true, and it’s interesting because it’s the converse for women. If you’re a jock and a women, you are presumed gay – the extreme spectrum is that you cannot be both gay and an athlete, but those things, can totally go together.”

In comparison, for the average American high school or college student, being gay still today is fraught with difficulty and misconception. The proof of this can be seen in the more recent case of Tyler Clementi’s suicide at Rutgers. Even in New York, where gay marriage was made legal, Hayes said “We are always afraid these rights will be taken away from us, so we need to push for equality.” He said, “The whole world isn’t like Manhattan, of course, and many live in fear across the country of being bullied and discriminated against.”

As a gay athlete, there’s always worry that sponsors will not be as forthcoming if you are openly gay said Hayes, but he does believe the gay civil rights movement is gaining ground, albeit slowly. In Steven Pinker’s, "History of Violence in Decline," Pinker says that the 20th century made huge gains in its quest for human civil rights. In his theory, the world is becoming less violent because there is greater focus on the “individual and their rights.” He said civil rights grew after slaves won their freedom during the 1800s; women’s, people of color, and the LGBT communities have all progressed, and next animal rights will come into question.

Hayes believes male and female athletes should be known for their achievements made in their sport, and what happens off the field, away from the court, or outside the pool deck should not interfere with their careers. Perception takes time to change, but if the Pinker theory is right, maybe one day being different will be the norm. Gay athletes that come forward in today’s world still run the risks mentioned in their pursuit of being honest with themselves. There is hope; athletes – like Jackie Robinson – are often the first to break social barriers, because sports are said to be the universal equalizer, and this may prove true for gay athlete too.

Sasha Maria Schwendenwein is a has a Master of Broadcast Journalism degree from Columbia University, and a dual citizen of both South Africa and Austria. She is an All American swimmer and former internationally ranked professional swimmer in the 200-meter butterfly. She speaks English, German and Afrikaans is interested in covering world religions, politics and sports. You can follow Sasha on Twitter @smschwen or on her website.