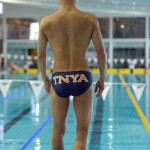 The International Gay and Lesbian Aquatics championships have wrapped up in Reykjavik, Iceland, with the big winners being Team New York Aquatics. They took first place in water polo, the large team category and Pink Flamingo.

This is the first time one team won all three categorizes, according to Charlie Carson of TNYA.

Results and a photo gallery below the jump:

Carson did an earlier writeup that focused on some individual achievements.

Dan Anders, whose partner Anh Dang, swims for Philadelphia, shots some photos for Outsports. You can see more of Dan's water polo, diving and swimming photos.