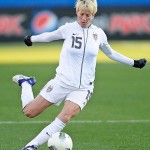 U.S. star women’s soccer player Megan Rapinoe, who will be on the Olympic team, seemed to be a bit coy in May when she replied “we’re out there” to a question about when a star player would come out. If there was any doubt, she made it official in an interview with Out magazine:

Not that Rapinoe has been hiding anything; it’s just that no one ever asked her directly. “I think they were trying to be respectful and that it’s my job to say, ‘I’m gay.’ Which I am. For the record: I am gay,” she says. In fact, Rapinoe’s been dating her girlfriend, an Australian soccer player, for three years, and even brought her home to visit her family in Northern California last Christmas.

Rapinoe said she felt it was important to come out publicly:

“I feel like sports in general are still homophobic, in the sense that not a lot of people are out,” she says. “I feel everyone is really craving [for] people to come out. People want -- they need -- to see that there are people like me playing soccer for the good ol’ U.S. of A.”

In her answer, Rapinoe sounded a lot like Anderson Cooper, who finally came out publicly today, saying, I do think there is value in standing up and being counted." Hear, hear.