London 2012: Greg Louganis to attend first Olympics since 1996 as mentor to U.S. divers

Share All sharing options for: London 2012: Greg Louganis to attend first Olympics since 1996 as mentor to U.S. divers

For the first time in 16 years, Greg Louganis will be attending a Summer Olympics, glad to be back working with the sport that made him famous.

Louganis, who won four gold medals at the 1984 and 1988 Olympics, has been an athlete mentor for USA Diving since 2010, working with the divers and coaches in preparation for London.

He has acted basically as a consultant. "Coaches would put in a request to visit their program for a few days," he said in an interview with Outsports. "I would observe, work with the kids, work with the coaches and write a report with my recommendations. ... It's been great."

U.S. diver Nick McCrory said of working with Louganis: "Having him here as a role model and mentor is invaluable."

Louganis, 52, is not sure what kind of access he will have with the American divers in London, given the level of security. But he will be ready if a diver needs some last-minute tips or advice. 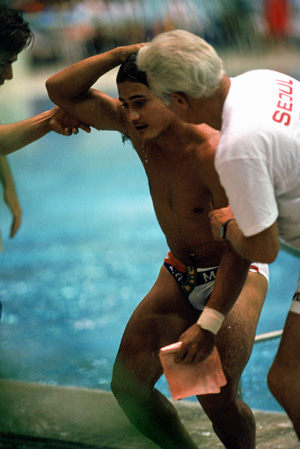 Greg Louganis exits the pool after hitting his head on the board during the 1988 Seoul Summer Olympics. (Photo by Pascal Rondeau/Getty Images)

Getting advice from Louganis would be a no-brainer. With four Olympic gold medals -- he swept the springboard and platform in 1984 and 1988 -- he is perhaps the greatest diver in history. No one who saw it can ever forget him whacking his head on the springboard in Seoul in 1988, drawing blood and yet coming back to win the title (see video below). He tested positive for HIV in 1988, but did not come out publicly as gay until after retiring in the early 1990s.

“I was out to my friends and my family" while competing, Louganis said. "It was just my policy not to discuss my sexuality to members of the media. I wanted my participation in the sport to be about the sport. I didn’t want it to be about being the gay diver."

Surprisingly, this is the first Games since retiring that Louganis has been asked to help prepare American divers. He told NBC's Olympic site that he did not feel welcome and blamed homophobia.

"I was giving USA Diving the benefit of the doubt," Louganis said. "You know it’s sad, but I’ve seen changes, and that’s the reason why I’m back."

In London, Louganis will be watching a diving competition on both the men's and women's sides expected to be dominated by China.

"The state of diving in the entire world is chasing China right now. So, they're the favorites. But it's the Olympic Games and anything can happen."

He has hopes that the U.S. can end its long medal drought. An American man last won a medal in springboard in 1996 and platform in 1992. For women, it was 2000 in the platform and 1988 in the springboard. The sport is clearly at a crossroads in the U.S.

"We've got David Boudia who's a silver medalist at the world championships last year," said Louganis. "He's come on pretty strong. This will be his second Olympics." He is also excited to see how the synchronized springboard duo of youth (Kristian Ipsen, 19) and veteran (Troy Dumais, 32, in his fourth Games) will fare.

He's most excited about the men's platform, where defending champion Matthew Mithcam of Australia is competing. Louganis calls Mitcham "an incredible talent." China's Qui Bo is the man to beat, he said, though he also likes how American Nick McCrory and Brit Tom Daley look heading into the event.

"Men's 10-meter platform is going to be a real exciting contest because there are four or five individuals who can be scrambling up there in the top spot," he said.

On the women's side, he is most excited about the chances of Americans Cassidy Krug and Christina Loukas in the springboard. Overall, while the Chinese women are favored, they will need to be at top form with challenges from divers from Australia, Canada and Mexico.

Louganis is keeping up a hectic schedule before and after London. When I spoke with him, he was in New York about to get on a plane to Portugal where he was to judge cliff diving. From there, it was off to Hong Kong for a personal appearance before heading to London in time for Friday's Opening Ceremonies. He will also go to Wales later this summer to judge more cliff diving.

He is also working with documentary filmmakers Cheryl Furjanic and Will Sweeney to raise money for "Back on Board: Greg Louganis." The filmmaker describes the documentary as a sort of a "who is Greg Louganis" meets a "year in the life" story."

"It reveals Louganis’ evolution from childhood diving prodigy to Olympic champion, and from pioneering openly gay athlete with HIV to a sometimes forgotten sports icon," Furjanic said. "At the same time it documents his return to diving as a mentor to U.S. Olympic divers competing at the 2012 London Games, which provides an exciting new chapter to his life-story. Greg had been struggling -- financially and emotionally -- when we met him and started shooting and the film shows that as well."

There is a Kickstarter site set up for the film, hoping to raise an initial $50,000 (almost $11,000 has been pledged so far). The goal is to release the film in 2013, the 25th anniversary of Louganis' stirring triumph in Seoul.

"Greg’s story is really important," Furjanic said. "Greg is a pioneering openly gay athlete with HIV whose inspiring story needs to be told. We knew that the story of Greg's return to diving wasn't going wait for us to fund-raise, so we got a crew together and started shooting. We turned to Kickstarter to help us make the film independently for as long as possible -- to ensure his story is told with dignity.

"So many people have fond memories of Greg -- cheering for him after he hit his head, how his book helped them come out, how he helped Americans understand more about HIV than they ever thought they would, etc. When we tell people we're making this film, they are so excited to find out what Greg is doing and how he's doing. And we're especially excited to introduce Greg to a younger generation."

Louganis sees the documentary as coming at the right time in his life.

"It's been an interesting journey, doing a diary on film," he said. "It's amazing how things have changed in my life just in that one year. We started it with one thing in mind. Then everything changed and changed again and it's changing still. It's been fun."

Here is the Kickstarter trailer for the film: