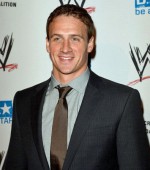 Olympic gold medal swimmer Ryan Lochte doesn't have grand plans for his post-Olympics life, unless you consider being on "The Bachelor" reaching for the stars. He has appeared on the red carpet for "WWE SummerSlam," been on TV with Joan Rivers talking fashion and spent his birthday in Vegas cavorting in a pool filled with bikini-clad women and racing Prince Harry. Reports the New York Daily News:

Prince Harry tried to end Ryan Lochte’s championship reign Monday, duking it out with the Olympic hero in an after-hours race at a boozy Las Vegas pool party.

The wild Windsor jumped in the water around 3 a.m. still wearing his jeans and cleared a path through the Wynn hotel’s XS Nightclub pool, exclusive video obtained by the Daily News shows.

The Daily News has video of the "race," which is so grainy that they need to superimpose text telling us which one is Lochte and which one is Prince Harry. Lochte, 28, tweeted that it was "the best birthday party."

The swimmer doesn't seem like the brightest bulb (he thinks he's original with his using the catch-phrase "jeah"), but there's no begrudging him having a good time. And if his aspirations reach no higher than reality show star, there's nothing wrong with that. He's young, hot and successful, and he's capitalizing on all that; he apparently wants $750,000 to be on "The Bachelor," and will play himself in an upcoming episode of "90210." Lochte plans on swimming at the 2016 Olympics in Rio, which means he will stay in the public eye and he seems to love every minute of it.