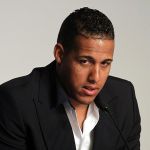 Yunel Escobar, suspended three games by the Toronto Blue Jays for writing a gay slur on his eye-black, met two gay athletes during a busy day on Thursday.

Escobar met with openly gay sophomore Boston College runner Jose Estevez and You Can Play founder Patrick Burke after being invited by the Blue Jays. At night, Escobar caught the ceremonial first pitch from openly gay former pro soccer player David Testo, in his first game at home since the suspension. The Associated Press reported he was met with some booing from fans and some cheers as he took his first at-bat.

Burke, Estevez, and Escobar met for roughly 45 minutes in the Blue Jays front office, according to a You Can Play press release. Estevez spoke about the issues faced by LGBT athletes, both in the locker room and at home. "Before I came out, my teammates threw around homophobic slurs constantly. After I came out, it stopped. Athletes need to recognize how their language affects their teammates and fans." Escobar expressed appreciation for Estevez's willingness to work with him, and spoke about his desire to be a leader in the fight against homophobia to make up for his previous actions. ...

Said Estevez on the meeting, "I think we really reached him today. I think he's had a change of heart and I believe that he's learned from this."

The estimated $100,000 in salary Escobar lost from the suspension was donated to You Can Play and GLAAD. It seems like he has learned his lesson, so perhaps this was the classic "teaching moment."