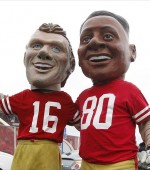 I consider myself a sporty gay. I love tennis. I cried twice during the past Olympics. I played soccer and ran track in high school. I did intramural basketball in college. But the closest I’ve ever come to playing football was capture the flag (it’s feeble distant cousin) during middle school P.E. class. And I never quite got into watching it as a spectator either.

Although I am a San Francisco native and my home team -- the 49ers -- have triumphantly earned a berth in the Super Bowl, I am having a difficult time even passing for a fairweather fan. My friends, family, and most importantly, my Facebook news feed are all abuzz with excitement for the Niners’ “Quest for Six.” But even among the newly gold-blooded bandwagoners, I feel like a pyrite-blooded imposter phoning in my enthusiasm on Manti Te'o’s girlfriend’s pay-as-you-go SIM card.

But I can’t just avoid the imminent hoopla. Feb. 3 happens to be my birthday and my friends decided to economically conflate my birthday celebration with their Super Bowl viewing party.

Therefore, I’m going to be a good sport and try to make the best of the situation by attempting to find some elements of the big game that might pique my interest. And since I’m sure there are a lot of similarly indifferent gay guys out there who will also be stuck at Super Bowl parties trying their best to care, I am going to share my findings.

1. Our Straight Allies: Brendon Ayanbadejo, the baby-faced linebacker for Baltimore, has expressed his desire to utilize the heightened media attention surrounding the Super Bowl to promote his passionate support for the marriage equality and anti-bullying movements. He started speaking out for gay rights several years ago, so perhaps he will take things to the next level with his imminent Super Bowl demonstration and use actions rather than words. Personally, I expect nothing short of this type of a gesture from Ayanbadejo.

2. The eye candy: But let’s be real. When I look at an NFL roster, I don’t see a catalog of influential political activists — I see a dessert menu. For many of us, the biggest gift the NFL gave us in 2012 was that comely Rob Gronkowski spread in ESPN’s Body Issue. The Gronk was photographed completely nude holding up a piñata with his ... mysterious cantilever … and wearing a candy necklace.

Although that photoshoot definitely catapulted Rob into my Top 5, it wasn’t quite enough to land him the #1 spot on my list of NFL eye candy. I have to say Cam Newton, who was awarded the Rookie of the Year award last February, is still the hottest guy in the NFL. I mean, even David Letterman got a little hot and bothered when he first laid eyes on him.

Even though Gronkowski and Newton won’t be on display this Super Bowl Sunday, I guarantee it won’t be long after you first tune in before you are feasting your eyes on some steamy beefcake who is a vision in spandex. San Francisco 49ers tight end Vernon Davis has a Herculean physique that reminds me of a jungle gym because whenever I see a photo of him I get this primitive instinct to just climb him. He also has a Colgate smile and penchant for art and design. Baltimore Raven Dennis Pitta, also a tight end, is your prototypical tall glass of water. In addition to charmingly tousled hair he’s got a sweet demeanor and just seems like the type of guy who would make a good shoulder to cry on. He also just has a really great set of sturdy-looking shoulders in general.

3. Christian Clamor: The all-too-cute Neil Patrick Harris came under fire for his recent CBS Super Bowl promotional campaign where the openly gay actor is shown wearing football eye black with the date of the big game etched in white writing. Many Christians were upset because they interpreted the campaign as an endorsement for the gay agenda at the expense of their poster boy, Tim Tebow, who routinely wears the same stripes of eye black but with Bible verses etched onto them.

The strange thing is that Beyoncé is seen sporting the exact same look as Harris in her Super Bowl promo ads yet nobody has made any fuss over those billboards. I mean, we gays do love our very own Neil Patrick Harris and would go to bat for him any day of the week, but don’t the Christians know we would move mountains and straight run through fire for Beyoncé? If anyone is capable of subliminally galvanizing a gay revolution through strategic eye makeup, it’s Sasha Fierce not NPH.

4. DILF Alert: Jim and John Harbaugh, the head coaches for the two teams facing off, are so hot that I’m actually kind of pissed at their parents because as far I know they don’t have any other brothers, and it’s like, “Why did you only make two?” There is much debate about which of the two brothers is hotter but in my opinion there’s no contest — it's John. From my clinical observations, he clearly seems to be the saner of the two. There are moments when Jim’s face looks a little too much like Jack Nicholson’s in "The Shining" than I’m comfortable with.

Normally, intensity and a little anger is kind of spicy coming from a hunky head coach, but Jim’s aggression isn’t the smoldering kind of energy that we saw from Bill Cowher. When Jim argues with the zebras over a call, he oversells it like a child throwing a temper tantrum or Manu Ginobili flopping over a phantom foul. But the silver lining is that his theatrics make great material for GIFs.

Both Harbaughs are so fit and handsome the NFL really should dress them in something more flattering. The khaki pants and tennis shoes look is a little too … Forrest Gump. I suggest they wear the same pants as the players. Football pants are like Picasso drawings — all it takes is a few simple lines and you have a lovely sight for sore eyes.

But I suppose these are just my unrealistic pipe dreams. Apparently, the NFL is not too keen on making fashion statements. 49ers running back Frank Gore was recently fined over $10,000 for wearing his socks too low. Couldn’t the league just forgive him? I mean, the guy had a few more important things to worry about other than his socks like getting his team to the Super Bowl and his teammate wanting to kill him.

5. Extracurricular Activities: If none of the aforementioned items arouse any interest for football or the Super Bowl just focus on the side attractions. There’s Beyoncé at halftime, the epic commercials, and the Puppy Bowl afterwards. If you’re the gambling type you can bet on just about everything from the coin toss to the amount over/under 1:32 that it takes Alicia Keys to sing the national anthem. And if the rough play on the field turns you off, just imagine the athletes going through all the gentler training they do in order to improve their flexibility and balance like the ballet that Lynn Swann (Lake!) used to rehearse and the yoga that current 49ers tight-end Brian Jennings practices.

Marty Maguire is a former competitive soccer player and track athlete. He is currently writing a memoir and playfully blogging at The Great American Memoir.