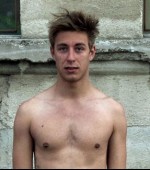 Daniel Rajcsanyi, who goes by "Dani," is a 20-year-old openly gay German snowboarder from Munich and a free spirit. In his bio on the Isenseven snowboarding site, he describes some of his hobbies as "playing World of Warcraft, speed dating and wanking."

So it's not a surprise that he would film a video of himself snowboarding naked -- and show himself doing a header into a pile of snow; talk about "shrinkage." The video, "German Sausage," was shot last year in the Netherlands as he was shooting videos for entry in the Nike Chosen competition.

In an email with Outsports, Dani explained why he made the video:

"I wanted to make a funny thing out of snowboarding. It was a provocation for the 'freestyle' scene. I wanted to change the bourgeois thinking and show the total freedom and fun of snowboarding, which should be the main thing." He said he does not know of any other openly gay snowboarders and hopes that with the video he "made a little step forward."

The video is NSFW since it does show frontal nudity, but you can check it out here.

Here is more of Dani snowboarding, with his clothes on. It's very creative and I really enjoyed watching it: