Oops! RGIII came out as gay this summer, according to British news site

Share All sharing options for: Oops! RGIII came out as gay this summer, according to British news site

I must have been in a coma this August when Washington Redskins quarterback Robert Griffin III came out as gay. I think it would have at least made the news somewhere. Britain's Sky News told me so after it listed famous gay athletes in reaction to diver Tom Daley saying he has a boyfriend. 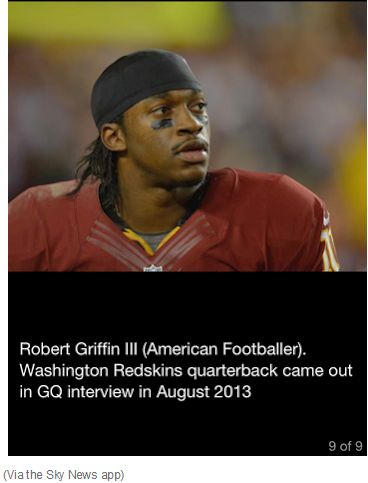 Dan Steinberg of the Washington Post helpfully shows how Sky News got a wee bit confused:

For the record, this is what he said in that GQ interview.

"I think there are [gay players] right now [in the NFL], and if they're looking for a window to just come out, I mean, now is the window. My view on it is, yes, I am a Christian, but to each his own. You do what you want to do. If some Christians want to look at being gay as a sin, then thinking about other women, committing adultery-or any of those other sins that are in the Bible-those are sins, too. And God looks at all of us the same way."

It's similar to what Griffin said in 2012 to Outsports about having a gay teammate. Steinberg noted that Griffin is married and ran the item to illustrate how the quarterback winds up making news even when what is written is inaccurate.

What was funny (and maddening) were the comments to Steinberg's article, with some taking talk of Griffin's sexual orientation seriously. "Did you write this to correct the inaccurate Sky News story or verify Griffin's 'straightness'?" one comment said. "If you are correcting the record then stick to that, but if you are pointing out that he is married to a woman as evidence of sexual orientation then you are really, really lame." An obviously exasperated Steinberg then asked the commenters:

My word, people, are you serious? ... I mean, Sky News made a mistake. A rather large one. And it was amusing to me, because RGIII is such a magnet for ridiculous news stories, and now here was another one, that went far beyond ridiculous to just made-up. That's all. That's it. It was mildly amusing. It has nothing to do with the percentage of gay Americans who are married.

For the record, RGIII did not come out as gay in August. If Sky News is reading this, you can check out our section on Out Athletes for future reference.