Ex-Major Leaguer Mike Piazza: 'If I was gay, I’d be gay all the way'

Share All sharing options for: Ex-Major Leaguer Mike Piazza: 'If I was gay, I’d be gay all the way' 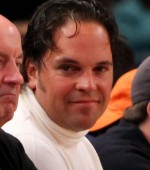 Former Los Angeles Dodgers and New York Mets catcher Mike Piazza is out with his memoir and in it he reiterates what he said publicly in 2002 -- he is not gay. The New York Post has excerpts from the book:

"I found it hugely insulting that people believed I’d go so far out of my way — living with Playmates, vacationing with actresses, showing up at nightclubs — to act out a lifestyle that would amount to a charade,” he writes. “If I was gay, I’d be gay all the way.”

Since 2005, Piazza has been married to a fomer Playboy Playmate, Alicia Rickter, with whom he has two daughters.

In 2002, rumors swirled about there being a gay New York Met and many people immediately thought of Piazza, who was later reported to be dating TV weatherman Sam Champion (Champion married his male partner a year ago). Piazza took the unusual step of holding a press conference at the time to declare his heterosexuality:

"I'm not gay. I'm heterosexual. I can't control what people think. That's obvious. And I can't convince people what to think. I can only say what I know and what the truth is and that's I'm heterosexual and I date women. That's it. End of story."

It was the end of the story until Piazza decided to write about it in his book.