Police officer Javier Pagan raced to the scene to help victims of the Boston Marathon bombing.

After the horrific bombings at the finish line of the Boston Marathon, first responders rushed to the scene to help with the injured. Among those was Javier Pagan, a Boston police officer who is the force's LGBT liaison. Pagan's heroics are memorialized on the cover of the upcoming Sports Illustrated.

The Police Officer to the far right is a good friend of Boston Pride! He is the Boston Police Gay Liaison to the community Javier Pagan. One of the First Responders who was miraculously standing right behind the flags where the first bomb went off ---- Boston Pride would like to Thank Javier for all you do!

Pagan was born in Puerto Rico and grew up in Boston and was profiled in 2002 by Bay Windows:

"Literally I've always known that I was gay, I just really never -- I grew up in a Catholic home and I've got three older sisters, and being Hispanic, it's the big "machismo" thing," Pagan, explains of his reluctance to come out. "When I came out my family was completely like, `Who were you fooling? You're not fooling us, '" he laughs. "But it was -- in all honesty, I've had the best support from my family, my friends, even my colleagues. Like I said, I wasn't fooling anyone but myself."

Pagan was profiled by Crossfit Southie earlier this year, where he spoke about his husband:

I have been married for 4 years; my husband (Pedro) is a retired Sergeant from New York Police Department. Who during September 11, 2001 help rescue many people when the towers collapsed. Also, I had the pleasure of escorting Attorney Marry Bonauto to City Hall Plaza on May 17, 2004, When the Massachusetts Supreme Judicial Court ruled in favor of Gay Marriage. Not really fun fact but part of history.

Here is the full Sports Illustrated cover (Pagan is on the right): 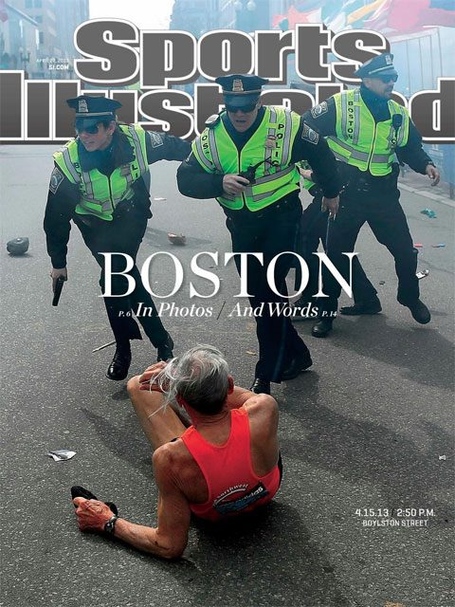