Bill Van Raaphorst has been openly gay in collegiate baseball umpiring for years.

He is also gay. Being gay obviously hasn't hurt his career with the NCAA, as he is at the very top of the pecking order because of his excellence on the job. However, he is the victim of homophobia from the occasional manager. Here is part of Van Raaphorst's official report about Edmonton Capitals manager Brent Bowers' anti-gay tirade against him in 2010:

After the ejection Bowers ran over to me and began screaming, "You know what I heard? I heard you are a fucking faggot. The rumor from several managers and people at the league is that you are a fag... So what do you do you fucking faggot? Do you take it up the fucking ass you faggot?" As he said this he bent over and grabbed his ankles as to demonstrate this action. I replied, "Nice really classy, what does any of this have to do with you acting like this? Real classy Brent, you are just a class act."

He was in my face screaming, "What's the matter did your fucking boy friend fucking cum on your face today, is that how you like it you fucking faggot." I said, "Great now you are just acting like a total ass, real classy Brent. I thought you were a big leaguer?" He replied, "I was in the big leagues where the fuck did you work? Who do you know in the big leagues...?" I replied, "I know plenty of big leaguers... players and umpires... and none of them act like you..." Bowers continued to yell and took off his hat screaming, "You need to tan your head faggot... " Then Bowers threatened me saying, "I ought to kick your ass you faggot."

[Michael] Gillmore the plate umpire came over and I walked away. Bowers continued to yell at me, "Walk away you faggot, you take it up the ass faggot." Bowers began yelling at Gillmore about 20 feet from me. I heard Gillmore tell Bowers, "Brent you crossed the line, you went way over the line. You need to get going." Bowers screamed, "I know he is a faggot, I was told by Gary Templeton (Chico Manager) and Kevin Outcalt (GBL Commissioner) that he is a fucking faggot. I know he is a faggot!" Gillmore began walking him toward the dugout, he continued screaming at me while on the way. Once in the dugout he soon left and the game resumed and ended without further incident.

Bowers was fired from his manager job after the anti-gay tirade, and Van Raaphorst was welcomed by the public with an overwhelmingly positive response.

Van Raaphorst sent me this great photo of him in Omaha sporting Nike's #BETRUE shoes. I guess that means he's literally wearing his sexual orientation, even if it's not on his shirtsleeve. 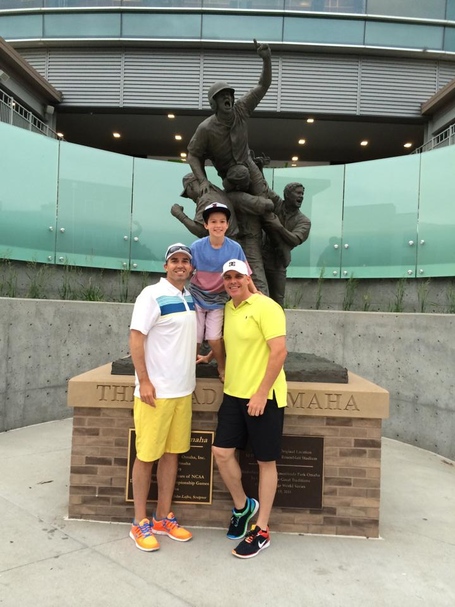