Ian Thorpe is openly gay and maybe now he'll be happy. I had a glimpse into his situation 10 years ago.

Share All sharing options for: I 'knew' Ian Thorpe was gay back in 2004

It was in July, a month before the 2004 Summer Olympics in Athens, Greece, and Long Beach was the site of a pre-Olympics swimming and water polo meet; Outsports got a writing credential for me and a photo pass for Brent Mullins. The atmosphere was totally relaxed since the swimmers were using it as a warm up for Athens and they gladly posed for photos and stopped for media interviews. In this context, Thorpe stood out.

Unlike all the other swimmers, male or female, Thorpe was the only one who came to interviews fully dressed and not in his Speedo. Brent had no problem getting swimmers and water polo players to pose for pictures; Italy's water polo team even invited us to their locker room. The one exception was Thorpe, of whom gay rumors had been swirling since he became an OIympic champion at the 2000 Summer Games in Sydney.

Thorpe would not cooperate for a photo and when he saw Brent he would literally dash down some stairs and hide. "My presumption was that he was gay," Brent said, "and it was like he knew that I knew and in that sense he felt exposed. I don't know what else was going on with him at the time."

Brent respected his privacy and did not chase after him, but he was determined to get a shot of Thorpe, the world's best swimmer at time, when he was in a public space. He finally got his chance when he saw Thorpe next to fellow Aussie swimmer Michael Klim, who was happily posing for photos with younger swimmers thrilled to be next to their stars.

Brent asked Klim if he could get a shot of he and Thorpe, and while Thorpe looked visibly agitated, Klim quickly said, "no worries, mate." We ran the shot on Outsports the next day: 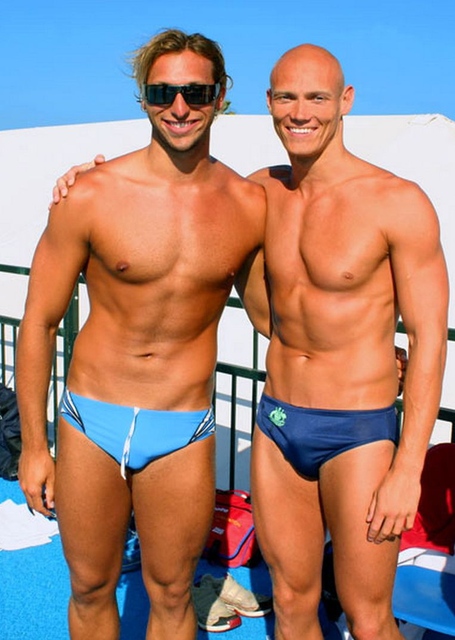 I had observed all this over the two days we were there and that's when I "knew" Thorpe was gay. I could not prove it in a court of law, but I knew in the way we gays often know about certain people. Rumors had been swirling around Thorpe since he took the swimming world by storm and it was clear they weren't invented out of nothing. His actions in Long Beach gave me a glimpse into why he might be uncomfortable in the spotlight, as if we all could look inside and see his secret, one he was to hold for another 10 years. I felt sorry for him, wondering what it was like to live under such a spotlight as an elite athlete and keeping something so important from everyone else.

In the following years, Thorpe's sexuality was a topic that cropped up regularly. There was Thorpe dating a person he described as "them," not a he or she. There was the time it was revealed he had a hot male Brazilian swimmer roommate, in a platonic way. At the 2012 London Olympics, Thorpe admitted that his interests in fashion, among others, made him see why he "ticked the boxes" on what a gay man is interested in.

Finally, in his autobiography two years ago, Thorpe categorically came out as straight, saying, "For the record, I am not gay and all my sexual experiences have been straight."

It was all not true, of course, as we discovered Sunday when Thorpe told Michael Parkinson that he is gay. Finally, Thorpe could not live the lie any longer. "I'm comfortable saying I'm a gay man, and I don't want young people to feel the same way I did," he said, adding that he wished he had come out sooner.

He revealed earlier this year that he has checked himself into rehab for alcoholism and depression. In his TV interview, he talked about being bullied at an all-boys high school, which caused him to go deeper into the closet. And he said something that every LGBT person who has been bullied can relate to: "If I had the chance to deck all those people, I'd be in jail by now."

Thorpe has suffered from an internal hell for the last 15 years and now free of his burden, I hope he can now be happy and a fulfilled human being. Closeted people conjure up all sorts of reactions from other gay people. On the one hand, you have those like actor George Takei writing on Facebook: "Those who believe it is no big deal or not brave of him to do so should read the hate mail, threats and disparagement that is in my inbox every day." On the other hand, this comment on Outsports reflects another point of view: "We are so supposed to forgive them for years of lying because gay = shame. ... And, of course when they come out, it's to make money and they will make money because this world is very backwards. There is a lack if character in every level with these men."

I find the latter sentiment way too harsh and lacking in any empathy and understanding.  Thorpe won five Olympic gold medals and was the best swimmer in the world for a time, yet he contemplated suicide and found release in a bottle. "It's something I was doing privately," he said of his drinking. "I didn't want to share my problems with people, I didn't want anyone else to know I'm unhappy, because I'm living a dream life for an Australian. I should be having the time of my life, but I'm not." That quite a burden to carry by oneself and I can't imagine the many sleepless nights he had or how many tears he shed.

I also don't think Thorpe is "courageous" for coming out now, though I am glad he has. He has been wildly successful in his sport and nothing would have stopped him from coming out a long time ago, something he now admits. Australian diver Matthew Mitcham did it in 2007 and he's turned out OK.

Thorpe did not risk the same level of physical abuse as gay people living in other parts of the world and his sport would have easily accepted him, as his family did. There's also the matter of what appears to be a quid-pro-quo between Thorpe and Channel Ten, the Australian TV network where he revealed he was gay Sunday. Thorpe, who has faced financial problems, will reportedly receive $500,000 from the station for being a swimming analyst. How convenient that after years of denial, he finally comes clean to an interviewer, Sir Michael Parkinson, with whom he shares the same agent and for a network that is paying him handsomely. It was wonderful that he unburdened himself and his disclosure will make a difference to others struggling with their sexuality, but it carries zero risk -- only reward -- so let's not confuse honesty with courage in this case.

Coming out is totally personal and it was up to Thorpe to decide when he was ready; no one else could make that decision for him. He's only 31, which is ancient in swimming terms, but still young for a man who can finally stop hiding and evading and for the first time in his life be a complete person. Welcome to the rest of your life, Ian Thorpe. May it be a long and happy one.