When the St. Louis Rams made Michael Sam one of their final cuts, the reason seemed clear -- they were loaded on the defensive line and that was a team strength. Now, three games into the season, the Rams defense has been a huge disappointment, especially the line that can't get any pressure on opposing quarterbacks.

Sam, seeking to be the first openly gay NFL player to appear in a game, made it on the practice squad of the Dallas Cowboys and he watched the Cowboys rally from 21-0 down to beat the Rams, 34-31. The Rams vaunted defensive line had zero sacks, and has one in three games. I know Chris Long is injured for the Rams, but that total is pathetic and the one thing Sam was able to do in the preseason is rush the quarterback.

It's not like the Dallas defense is lighting it up, as they did not register a sack against the Rams. But the Cowboys did stage their largest regular season comeback ever in going to 2-1. At 1-2, the Rams season is on its way to being lost and Coach Jeff Fisher is clearly on the hot seat. Defense is his forte and yet his Rams' loss was the second-largest lead ever squandered in team history. The defense needs to step up soon or come 2015, Fisher might join Sam as an ex-Ram.

--It's too bad the last Super Bowl didn't have the pulsating energy of the wild 26-20 Seattle overtime win against Denver. The Seahawks (2-1) led 17-3 at half and it looked like another rout of the Broncos (2-1). Then a safety, followed by an interception by Denver's defense helped cut the gap to 17-12. Peyton Manning threw a red zone pick late and it looked like game over when Seattle took a 20-12 lead.

But Manning engineered one of the best drives I've seen, leading the Broncos 80 yards in 41 seconds with no timeouts in the toughest stadium in the league. A tip-toe 2-point conversion catch by Demaryius Thomas tied the score. But Russell Wilson drove the Seahawks down the field and Marshawn Lynch's touchdown gave Seattle the win in overtime.

I hate the NFL overtime rule that doesn't guarantee each team a possession. Seattle's defense had given up the game-tying drive at the end of regulation, yet they all could have had a beer and watched the game in the locker room in overtime since Manning never got the ball back. It's a weird rule that depends too much on a coin toss.

Barring injuries, both these teams will be major contenders in their conferences this season, so maybe we'll see Round 3 in February.

--A weird moment in St. Louis came when Rams tight end Jared Cook shoved his quarterback Austin Davis on the sidelines. This was after Cook dropped a pass that would have been a touchdown. If anything, Davis is the one who should have been pushing Cook.

--Homoerotic comment of the week came from NBC's Cris Collinsworth, who wondered aloud if Carolina Panthers defensive coordinator Sean McDermott would show off his six-pack abs that Collinsworth was sure he still had from when he was a player. We'd like to see it too. 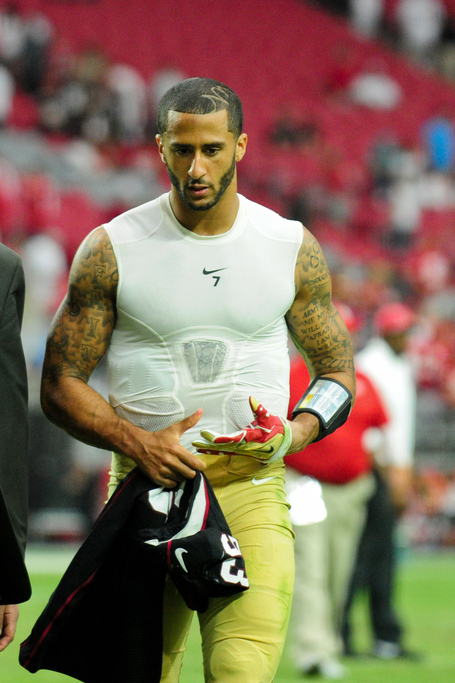 --Cyd texted me Sunday that Tom Brady is done. As a Patriots fan, Cyd is hoping that's not the case, but Brady has looked mediocre so far this season. The Pats are 2-1 thanks to playing the Vikings and Raiders the past two weeks, but Brady has been able to generate little offense. He's completing less than 60% of his passes and ranks 21st in passing yards. Part of the problem has been the Patriots inability to get him excellent receivers save for Julian Edelman and Rob Gronkowski, and letting go of Wes Welker to sign Danny Amendola has been a total strikeout. His offensive line has a hard time protecting him, which gives Brady happy feet.

I'm not ready to write off a Hall of Famer like Brady yet, but he looks like just another quarterback.

--Speaking of ordinary, Aaron Rodgers has looked that way in both Packers losses this season, including the desultory 19-7 loss at Detroit. He threw for 162 yards against a Lions pass defense that doesn't scare anyone, the second time this season he has passed for less than 200 yards.

--Rodgers is my fantasy QB in one fantasy league, so that has sucked. But in my other, I have Andrew Luck and through three games he is the highest scoring player in fantasy football. He's a dream fantasy QB -- the Colts don't run the ball well and often get into shootouts (Sunday excepted, but the Colts were playing the Jaguars), a perfect recipe for fantasy points.

--There was a cool moment after the Seahawks game, when cornerback DeShawn Shead proposed to his girlfriend on the field. She said yes. Had he proposed to his boyfriend, Twitter would have had a heart attack and died.

--Cincinnati, Arizona and Philadelphia are the only unbeaten teams left. Raise your hand if you saw that coming. Didn't think so. Jacksonville, Oakland and Tampa Bay are the only winless teams, and that was much more predictable.

--Hot players of the week: Quarterbacks Kirk Cousins (Washington), Nick Foles (Philadelphia). In the Eagles' wild 37-34 win over the Washington team, the two combined for 762 yards passing and six touchdowns. Cousins is too much of a Bible thumper and said "nobody's perfect" when asked about having a gay teammate, but he is easy on the eyes. So is Foles, more of a hot-boy-next-door type. 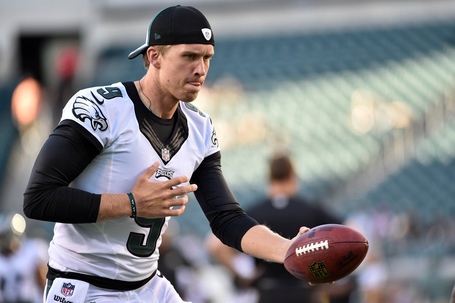 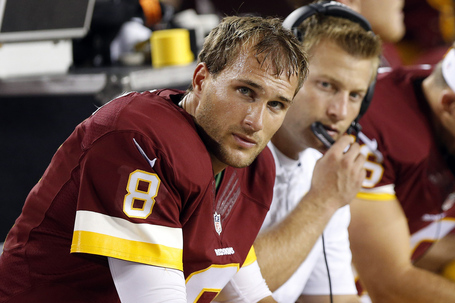