Share All sharing options for: Michael Jackson is dead 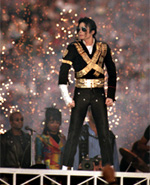 Reports are coming in that Michael Jackson, the "King of Pop," is dead. If so, the world has lost one of the greatest musical artists of all time, someone who changed the music world like only a couple other people ever have. He was also one of the most eccentric public figures in the world, adored by some, accused of child molestation by others.

Jackson flirted with sports at times. He performed the halftime show at Super Bowl XVII in 1993, in which the Cowboys clobbered the Bills, 52-17. Jackson also famously taught Michael Jordan how to dance, and then Jordan tried to teach Jackson how to play basketball. One was more successful than the other. Videos of those appearances after the jump.

On a personal note, Jackson's Thriller was the first album I ever bought. His music and videos drove my early interest in music and I've remained a fan to this day. Plus, he made crotch-grabbing cool. He will be very sadly missed.

Farrah Fawcett and Michael Jackson, two pop icons, both die on the same day. So sad.