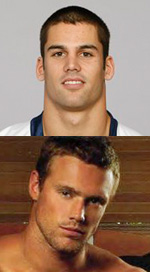 Thursday is the deadline to vote in the final round in the 2011 King of the Hardwood contest, pitting Eric Decker of the Denver Broncos (top) and rugby player Nick Youngquest. In voting so far, Decker has a 54.5% to 45.5% lead. If the lead holds, it would break a three-year run by rugby players. You can vote here (and see many pics of both guys).

A million thanks to Mariner Duck Guy, who puts on the contest each year. It's a ton of work, but people really enjoy it and Cyd and I appreciate all his efforts.