Ryan Murtha was a Boy Scout when he was younger. Now that he's come out as gay to his Villanova swim team, he knows he'll never be welcome back to help the Boy Scouts ever again.

Share All sharing options for: Villanova swim team takes gay teammate to Chipotle for his coming out party

Will Sheridan comes out as gay

King of the double life

How Olympic hopeful and national champion swimmer Tom Luchsinger wrestled with being gay in front of the cameras - and his mirror. The former Univ. of North Carolina standout shares his experiences in the closet.

Will Sheridan comes out as gay King of the double life

Ryan Murtha grew up a Boy Scout. He loved the Boy Scouts. His family - dad, mom and three brothers - have made the organization a family endeavor in Philadelphia, and Ryan made it his passion. Growing up from elementary school to high school he dedicated much of his free time outside of the classroom and the pool to advancing as far in the organization as he could, eventually being named an Eagle Scout. While he hasn't been able to engage with the organization much since entering college, Murtha has planned to become a Boy Scout leader upon graduating from Villanova University.

He won't be allowed to do that anymore.

In early January, while most students were still enjoying their winter break, Murtha gathered his Villanova swim team to tell them he's gay. It's a secret he had lived with for years, at one point telling himself he would simply never come out. His Roman Catholic upbringing, the aura of men's sports and the policies of the Boy Scouts of America all combined to drive a deep-seated shame in him as he began to recognize his attraction to other boys. It was a secret he had decided he could never share with the people closest to him.

Last autumn he met a guy who changed all of that. He was nice, he was smart - yeah, he was cute, too. Most importantly, he was openly gay with his friends and family. He and Murtha dated for a few months, Murtha sneaking away from his friends and teammates, creating stories about where he was headed on his own, keeping the guy he was dating a secret.

Yet with the boy's friends they were out and open. Murtha met more and more gay people, all friends of the object of his affection. Hearing their stories of coming out and finding acceptance bred in him a renewed confidence.

That new confidence led to a team meeting after their first practice of the new year, on Jan. 2. He had been writing his "coming out speech" for a while, saving it on his computer as a filed called "Tax Returns 1994" so a roommate wouldn't be suspicious if he stumbled across it. Since Murtha was born in 1994, in hindsight it may have given anyone reason for suspicion.

After the team settled into their seats for the short meeting, this is what Murtha said:

So this is tough for me and I apologize for taking so long to tell you guys this, but it took me forever to admit to myself and then it's been really hard to work up the courage to say it.

I'm gay. I've tried to bury this part of myself for a long time but slowly grew to accept it over the past year and a half. I want you guys to know that this isn't something that I chose. I was just born with it.

Anyway, I want you to know that I'm still the same person that I've been. I hope you guys don't see me any differently because of this. I don't think it should define me totally; it's just one of many parts that make up who I am.

But if for whatever reason you don't like me because of this, I guess I can't blame you because for a long time I hated myself for being gay, too. I made myself believe that living with this shame was worth not losing any of my friendships. But I don't want to be ashamed anymore. And I've kind of felt like I wouldn't be able to 100% accept myself and move on until I could be truthful with my friends. That's you guys. So if you're down to stick around and still be my friend, I can't even begin to say how grateful I would be.

If you have any questions or if you want to talk to me about it, feel free.

When he was done speaking, Murtha looked up at his teammates. Some stared back at him, others looked down. The room was silent. No response.

"I was pretty terrified. Forever I had played this in my head over and over again. That little pause after I finished speaking, all of the worst-possible scenarios played through my head. What if they didn't want to have anything to do with me anymore?"

That moment of quiet felt like the proverbial lifetime.

One teammate broke the silence with clapping. Then another. It was like a scene from a movie, with the entire team eventually joining in the celebration, cheering. They circled around Murtha and hugged him, assuring him that he was the same guy they've loved since he arrived on the team, and this wouldn't change a thing.

"Obviously, it turned out well in the end."

The team headed to Chipotle, where a routine post-workout meal awaited. Since it was still winter break for the rest of the school, the dining halls were closed. Thankfully Murtha was able to take advantage of the Chipotle gift cards he'd received for Christmas. "Chicken burrito with lettuce, cheese, mild salsa, sour cream and guacamole please." At Chipotle, various teammates approached him to reassure him everything was going to be fine - They weren't going to turn their backs on their friend and teammate just because he happened to be gay.

He's also come out to his Catholic parents, whom he said are still struggling a bit but who have offered him love and support.

Sadly, the same can't be said of the Boy Scouts. Because he is now openly gay, Murtha will not be allowed to engage with the organization as a leader - The Boy Scouts of America ban any gay person from working with youth. 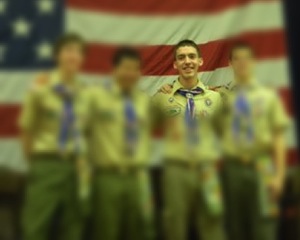 "It seems hypocritical not letting gay leaders into the Scouts. The Scout Law lays it out pretty clearly. 'A Scout is trustworthy, loyal, helpful, friendly, courteous, kind, obedient, cheerful, thrifty, brave, clean and reverent.' The policy prohibiting gay people goes against a lot of those points."

It's particularly painful for Murtha, who feels he became his own person while a Boy Scout. He was able to discover himself with the guidance of the organization and the group's leaders. Now he will never be able to give back to the next generation of Boy Scout youth.

"It sucks. I met my best friends in Boy Scouts. I have the best memories of it, and my brothers all went through it. It's been such a big part of my family and I learned so much of it. It shaped who I am today. I have a desire to give back to the next generation of Scouts, but I'm not allowed. It hurts. It feels like rejection."

Murtha now aims to help a different kind of generation - one that is LGBT in sports or in the Boy Scouts. He's quickly found the sports world to be far more accepting than he ever imagined it could be. If the Boy Scouts of America won't have him on the inside, he will help young Boy Scouts from outside the organization.

"I want to be able to help people going through the same thing that I did. If sharing my story can help just one person, then it will be worth it."

You can find Ryan Murtha on Twitter @ryanhoodie. He can also be reached via email at rmurtha@villanova.edu.