Openly gay announcer from Kansas State athletics wishes he could talk to his 13-year-old self. It got better.

Cameron Banning has played, coached and announced sports all his life. When he found the courage to come out, life at Kansas State changed dramatically.

Share All sharing options for: Openly gay announcer from Kansas State athletics wishes he could talk to his 13-year-old self. It got better.

I wish I could go back in time and spend just a half hour talking to my 13-year-old self. At that age I had a big smile always plastered on my face, but it was nothing more than a distraction from what was really going on inside.

When I first thought I was gay, like most people I denied it. For me playing sports meant I couldn't be gay. I had to be the guy who dated girls, who would eventually have kids, and then my kids would play sports. Rinse, repeat. That's just how it worked in my mind, and that's the way it worked in my family. My dad was a college baseball player, so I felt I had to live up to that. That was the "norm" to me. I was so afraid to not be that.

I tried so hard to be like everyone else, I didn't understand that no two people are the same. That was hard for me to understand in high school. I had to be someone I wasn't so I could please everyone. That was what I thought. I just wanted to be normal so people would love me. I remember going to Young Life camp and just praying to God that he would change me. I may have been laughing and had a smile as we were playing volleyball or singing karaoke. On the inside, in reality, it was an everyday struggle.

Young Oregon sportscaster out and proud

Max Milander was moved by the hardships overcome by LGBT people in rural Oregon. He hopes to be an NBA play-by-play announcer and doesn't think being gay will hinder him.

I wish I could tell my younger self that it's all going to be OK.

In high school I played golf all four years, and I was a basketball team manager for one. I was very involved in my high school and even dated a girl for three months. At least I was playing the part. From the outside looking in, I was no different from anyone else. It was just how I wanted it to look. Being gay and playing a sport didn't even cross my mind. I didn't know one gay person in sports. Not one.

Even though deep down I wanted to leap to the front of the line and be a leader, in high school I held back.

That all changed my sophomore year at Kansas State when I lost my two-year old cousin to leukemia. She was like the little sister I never had, and we became so close. She was going through hell but she laughed, smiled, and had such a joy I had never seen in someone so young before. When she passed away I sat at her funeral knowing it was time. It was time for me to be truly happy. Life is so precious and so short. Was I really going to live a lie my whole life? My two-year-old cousin inspired me in a way she could never understand. In her tragedy there came a light inside me that I will be forever thankful for. 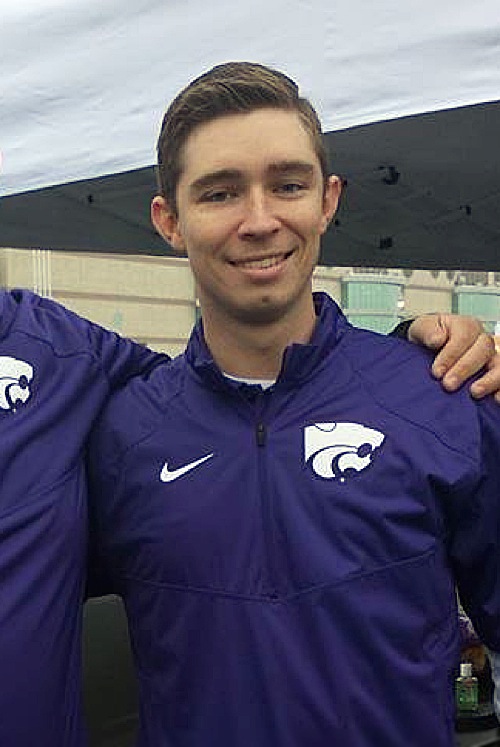 I am 23 now, and pretty much everyone close to me knows I am gay. Throughout my time at Kansas State I worked for the Athletic Department for four years, played in many intramural sports, and also coached youth basketball and high school baseball. I've also been an in-game announcer for our volleyball, baseball, and men's and women's basketball teams. That's been amazing and I can't wait to do so much more of that.

Sports were and always have been my life, and you know what the best part is? Not one person cared I was gay. Not one.

My family has been so supportive, and even my grandmas came around! They watch more Ellen now then they probably ever have before. I was most scared to tell my friends though; I just didn't want them to think I was any different than I was before they knew.

My fears were a waste; they all have been so amazing, and I am closer to them than I ever could have imagined.

I had a boyfriend in college for almost two years. If it wasn't for him, I probably wouldn't have been able to tell my friends, family, or former teammates. I needed someone to support me if it all came crashing down. Though I had accepted who I was, I was fearful others would not.

What I wanted most was someone to look up to. I needed to see that someone was just like me and everything was just fine. It is my hope that one day I can be that person I was so desperately looking for. I want to help, I want to educate, and I want to inspire. I feel that if had I seen and met someone like me, I could have done it. It wouldn't have taken a tragedy for me to understand who I was and who I wanted to become.

I wish I could be that person for my 13-year-old self. I wish I could give him a hug and make sure he knows the truth about life: He can play sports and be gay, and neither has to define him. He can work in sports and accomplish any dream he has. Working in athletics and being a coach has been a dream come true, and being gay has had zero effect on it.

It worked out just fine for me. But those years of worry were a waste. Everything turned up roses when I decided to just Be True.

Cameron Banning is now living in Austin where he hopes to soon call games for the Univ. of Texas. You can follow Cameron on Twitter @C_Banning. You can also email him at bannincd@gmail.com. For more insight into Kansas State sports, check out Bring On The Cats.