Things we give thanks for in 2013 gay sports

Share All sharing options for: Things we give thanks for in 2013 gay sports

Here are things we are thankful for in 2013 in the gay sports world:

Nick Symmonds thanks his gay friends after winning medal.
Symmonds won the silver medal in the 800 meters at the World Track and Field Championships in Moscow. This was just weeks after Russia passed draconian anti-gay legislation. After the race, Symmonds told a Russian website he was dedicating the medal to his LGBT friends. He told Buzzfeed why he decided to speak out:

"I am still walking a fine line here in Russia, attempting to be respectful of their laws and their culture, but at the same time trying to lend my voice to the movement for gay rights. I would say what inspired me to be a bit more vocal was a video I saw on CNN the other day. This video shows two Russian women kissing in a street and a deranged lunatic running up and pushing them down. That dipshit really pissed me off. It gives me great pleasure to imagine him reading my words in a newspaper and to know that his actions singlehandedly irked me enough to break my silence here in Russia."

The story touched such a nerve it was shared 19,332 times on Outsports and retweeted 596 times.

Warwick rowers get naked for a cause.
We like the Warwick University rowers in England for raising money to fight bullying. We like them even more for making a calendar and video of themselves naked. It's a win-win!

Jason Collins, Robbie Rogers and Brittney Griner.
Three professional athletes coming out as gay within months of each other is pretty amazing. Griner handled her coming out rather matter of factly. Rogers came out when it appeared he was leaving pro soccer, so he became the first pro team athlete signed by a team knowing he was gay when he was picked up by the Los Angeles Galaxy. Collins' story had the impact of a sports earthquake, dominating news, with Collins get a shoutout from President Obama.

Out on the court.
We had our first two publicly gay college basketball players come out this year – Jallen Messersmth at Benedictine College in Atchison, Kansas, and Derek Schell at Hillsdale College in Michigan. Both play at small colleges that are either religious or conservative and both have been accepted by their teams.
They join several other athletes or coaches who shared their coming out stories. You can find them all here.

Fallon Fox keeps on fighting.
No athlete has done more to promote transgender people in sports than the mixed martial artist. She suffers terrible online abuse from clueless (and anonymous) Internet commenters every time we run stories about her. Yet she takes all the blows, forges ahead and shows she is the better person.

The rugby-playing Burgess Brothers.
Thank heavens Mr. and Mr. Burgess in England decided to crank out four sons, all of whom play rugby in Australia, and all four who are hot. Brother George was even nice enough to take nude selfies. The four Burgess Brothers, with their mom, looking very dapper (photo by Mark Metcalfe/Getty Images. Click image for larger view): 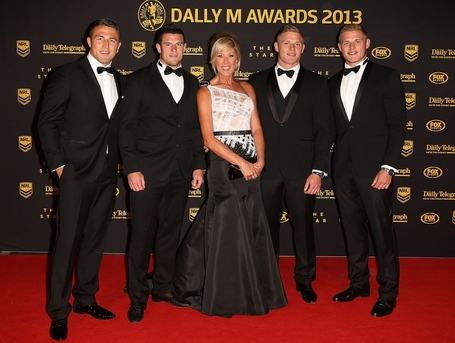 Straight allies and their limitations.
In the past year, straight allies in sports have gotten more media coverage than the LGBT athletes they are supporting. Patrick Burke, the straight founder of the You Can Play Project, wrote a much-needed corrective:

"I can't shake the feeling that we've gone too far. Allies have raised our profiles beyond what is necessary to help the LGBT community. It's been a big year for allies to get famous, grab a book deal, win awards, maybe pocket some speaker's fees for appearances. Resources that should be going to empower LGBT voices are instead going to enhance the visibility of straight people. We've created professional allies (or, as the history major in me would call them, mercenaries). We've created famous allies. Think of how absurd that concept is."
We still need straight allies, but Burke's position that they need to take a back seat and let the LGBT athletes drive the bus is something that needed to be said.

French swimming "couple."
We loved French Olympic swimmers Florent Manaudou and Frédérick Bousquet  posing for an intimate photo in a campaign against homophobia. It was for a project called "imaginary couples" and the photo by Olivier Ciappa tells it all: 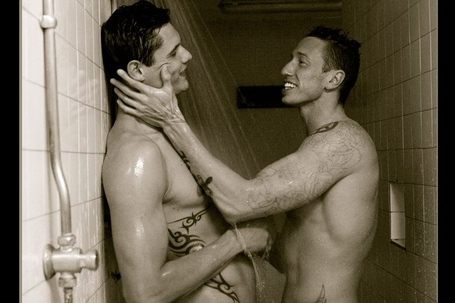 Nike steps it up in a big way.
Nike has sponsored the first two conferences of the LGBT Sports Coalition. The company's #BeTrue line of apparel was so successful that proceeds from the sales resulted in the coalition getting a check for $200,000 to fund projects of coalition members. It is a great example of a successful marriage between commerce and activism.

Happy Thanksgiving! What are you thankful for?