Jason Burch played in the Minors for four different MLB franchises from 2003-2008. He played in college for Nebraska. He was gay the whole time, telling teammates when they asked. Looking back, he wishes he had come out more publicly while playing.

Jason Burch was playing for the Bowie Baysox, a AA affiliate of the Baltimore Orioles halfway between Washington DC and the Chesapeake Bay, in mid-2008 when he got "the question."

Burch had long held a belief - instilled him years earlier by his mother - that had shaped his interactions with people around him all his life: "Never answer a question no one asks you." It might seem convenient for a closeted gay professional baseball player to live by a mantra that tells you not to open up yourself to people unless they ask you to. It's convenient, right? You shouldn't come out to anyone in baseball because that's just not what you do. If you're not asked, don't tell.

But that's not Burch. Nothing is simply for the sake of convenience in his life.

Growing up in a devout Christian military household in Nebraska (and elsewhere, like so many military families), he denounced Christianity as a teenager. His father, whom Burch describes as "rigid in his moral framework," did not take it well at the time.

"From that point forward, and probably still today, much of my interaction with my dad has been about people thinking differently and diversity of viewpoints, and how that's much more noble than fundamental views of right and wrong as defined by the Old Testament. It's a healthy discourse."

That's not somebody who follows a moral compass out of convenience.

Still, through his Minor League career that stretched across six seasons and four Major League Baseball franchises, Burch kept to that mantra: No one asked, no need to tell. During a game for the BaySox in 2008, a rare opportunity presented itself. Sitting in the bullpen, one of his teammates, a pitcher from Latin America, asked him if he had a girlfriend with whom to spend their upcoming break. The door opened and Burch strode right through it.

"I'm not interested in girls. I'm gay. And I don't have a boyfriend."

Burch shared his secret with some teammates 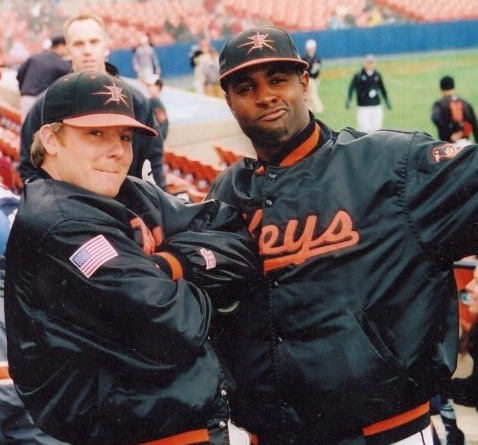 Burch (right) with JP Martinez, one of the teammates he came out to while with the Frederick Keys. Martinez is now a pitching coach in the Minnesota Twins system.

While Burch didn't have a significant other, it was not for lack of trying. Despite not coming out publicly to fanfare in a much-hyped magazine article, Burch was quietly dating men throughout his time in baseball.

That wasn't the only time he shared his sexual orientation with teammates. He opened up to people he trusted, men he had known for a while and people he considered true friends. That list of trusted teammates simply wasn't very long, as the life of a Minor League player is full of change. He played for five different A+ and AA teams, and two Major League spring trainings, in just his final two seasons in baseball. Players are traded, moved up, dropped down and sent to other teams all season long. Opportunities to build deep, trusting relationships with teammates are few and far between.

"Anyone who has played with me and has ben in the bullpen with me knows I'm not afraid to talk about sex or gay rights or feminism or anything that some people might consider academic. I was interested in seeing how they handled it and what they thought about it."

Just like that day in 2008, the other guys generally handled it fine. Sometimes a teammate would change the topic. Other times one of them would admit that he likes to have "anilingus" performed on him by his girlfriend. This is the world of the baseball bullpen where there are no secrets.

The bullpen was an important outlet for Burch, some way to connect his personal and professional lives. He was in his early-to-mid 20s when he was pitching in the Minors, just exploring his sexuality as a young man. The homophobic stereotype of baseball players was not going to stop him from looking for happiness off the diamond.

College infielder came out to his team

Ben Larison plays baseball for Coe College in Iowa. When he met tennis player Mark Kroll, it started a two-year journey that brought them both out to their teams and into a loving relationship.

Billy Bean, the openly gay former MLB player, will head up baseball's efforts to build a safe workplace for all as Ambassador For Inclusion. His efforts will touch on gay issues, as well as race, gender and other issues of diversity.

"I came of age as a gay man in those six years. It was difficult because the only way I could regularly meet men was on the Internet, and that's just not how I relate to people. I like to see how people talk and listen. That's the only way I can take an interest in a man, to see him talk and see him walk. So that was the real difficulty for me, the means by which I could reliably meet men, sites like Manhunt and Gay.com and Adam4Adam."

Burch dated men in every city where he played throughout his six-year career. His longest stints came with affiliates of the St. Louis Cardinals and the Colorado Rockies in Peoria, Ill., Tulsa, Okla., and Modesto, Calif., hardly centers of the gay community.

Venturing into these towns and interacting with the people was one of the elements of Minor League Baseball he loved best. While he described professional baseball as "like an individual sport," he relished the opportunity to meet people in the smaller cities and towns away from baseball. He wasn't on ESPN or the front pages of local newspapers, so it was easy for him to take his baseball cap off and meet people - gay and straight - without delving into his baseball career. Unless they asked, he preferred to share who he was, not what he did.

"One of the reasons I left baseball, apart from an injury, was that it seemed insular and isolated from the rest of the world. The lifestyle didn't change where you were. There was no real energy from the baseball players flowing to the city." 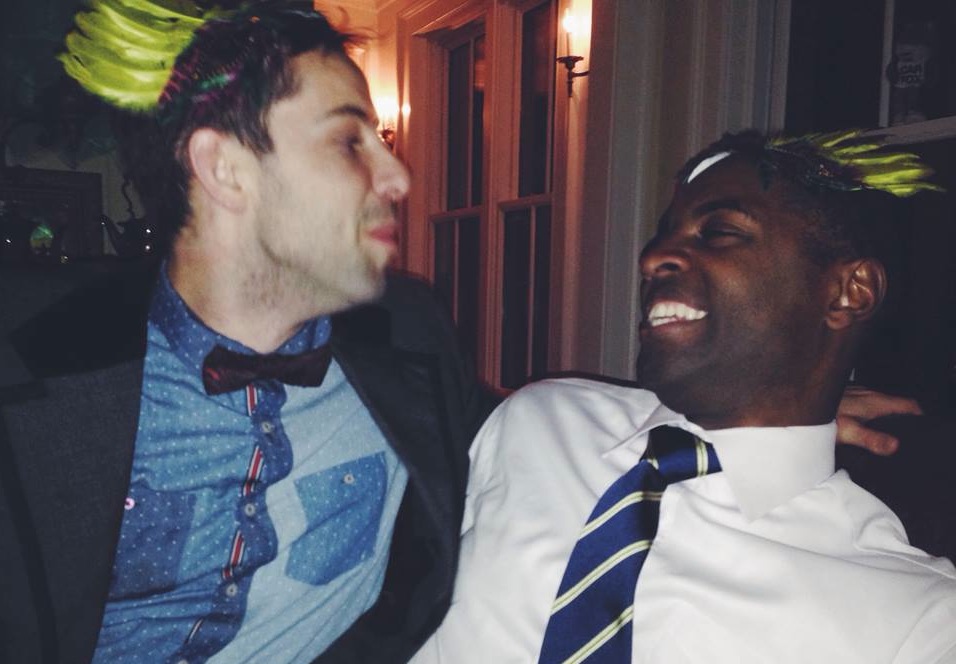 Since leaving baseball in 2008 Burch has earned a law degree from Northwestern University School of Law. He met his partner, Drew Raines (left in the pic), in 2012 at a Starbucks, introduced by a mutual friend. He is now an attorney with Sidley Austin LLP in Chicago, focusing on food and drug enforcement and other "high-stakes white-collar matters." Yet part of him misses the thrill of taking the mound.

"I miss pitching. I miss the fireman role. I miss the feeling of being relied upon, coming out of a bullpen, feeling like a secret weapon. I miss that agonizing attempt to throw the pitch exactly where I want to throw it. I loved that."

And yes, part of him wishes he had come out more publicly while he was playing. Major League Baseball has only ever seen two gay players - Glenn Burke and Billy Bean - come out of the closet publicly. They both did it after they retired. Former Minor League pitcher John Dillinger has also shared his story. MLB umpire Dale Scott will officiate his first season as an openly gay man this year. College baseball players like Chandler Whitney, Matt Kaplon and Ben Larison have come out while still playing.

Yet no Major or Minor League Baseball player has ever come out publicly while active.

"Looking back, I wish I had told the whole world that I'm gay from day one. That feeling of being relied upon, that people must turn to you as a closer to make things right, to have that role - and to have people have that feeling about me in that role - as a gay man, I think that would have been a powerful message. If we are talking about changing people's opinions, I do think that would have been a powerful message. But I wasn't really thinking about that at the time."

Now that he's had time to reflect, he wants to help.

You can reach Jason Burch via email at rburch@sidley.com. You can also find him on Twitter @RJasonBurch.


Jason Burch played for the Nebraska Cornhuskers before entering the pros.